Intelligence liaisons between Croatia and France: From Dumont and Handala to Kolinda and Macron

The head of the Croatian SOA, Daniel Markic, is a French citizen who cooperated with French intelligence during the war. Markic was an intelligence officer in Zagreb when French terrorist Lionel Dumont entered BiH in the 1990s. Al-Qaeda member Ahmed Zuhair was given an official ID by Croatia. Handala in BiH commits first terrorist attack 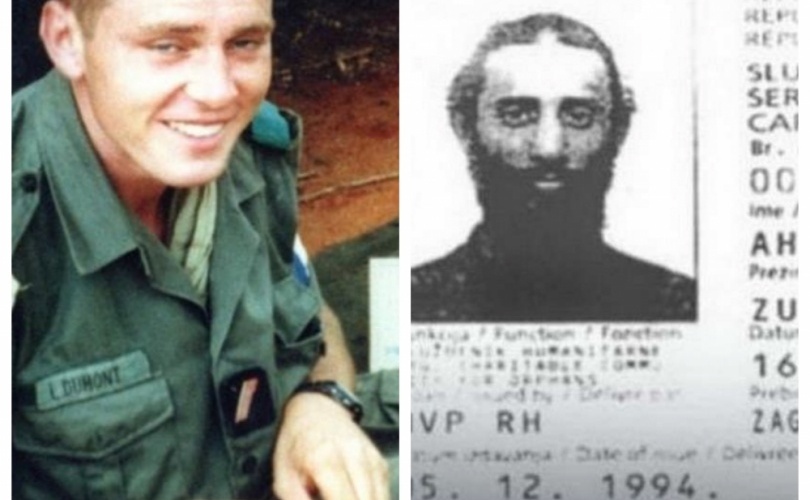 The head of the Croatian SOA, Daniel Markic, is a French citizen who cooperated with French intelligence during the war. Markic was an intelligence officer in Zagreb when French terrorist Lionel Dumont entered BiH in the 1990s. Al-Qaeda member Ahmed Zuhair was given an official ID by Croatia. Handala in BiH commits first terrorist attack

Unhappy with his life in the SFRY Ante Markic left his village Veljaci near Ljubuski in 1966. His final destination was America, but his journey took him to the outskirts of Paris. He married there and six years his son Daniel was born. The boy was educated in Paris, and following the dissolution of Yugoslavia in the early 1990s, he returned to Zagreb.

According to the official biography of Daniel Markic, he began his professional career in 1991 as a member of the Special Forces of the Main Staff of the Croatian Army. It was a Green Beret unit, led by former French legionaries Ante Gotovina and Ante Roso. The official biography also reads that Daniel Markic was transferred from the army to the Croatian Reporting Service in 1994.

A MAN WITH GREAT CONNECTIONS

Announcing his appointment as Director of the Croatian Security and Intelligence Agency, SOA, the Croatian media wrote that Daniel Markic is a "man with excellent connections in the French intelligence services".

The shadow general, real name Philippe Rondot, is one of the most influential French intelligence officers ever - known for taking part in the arrest of Carlos Chakal. In his book he wrote that during one of his visits to Zagreb and a meeting with Croatian officers, he met Daniel Markic, then an officer in the cabinet of former members of the French Foreign Legion, Ante Gotovina and Ante Rosa.

The allegations in Rondot's book were also published by the Croatian media, after Ante Gotovina personally stood up for Daniel Markic's appointment as SOA director. The French intelligence officer Rondot had good relations with Ante Gotovina for many years, who was, just like Markic, a French citizen. After the ICTY indicted Gotovina, and he fled, French authorities named the shadow general - Philippe Rondot - as the liaison officer with the Hague.

"Rondot was the liaison between the ICTY and France. He was also one of investigators who searched for Gotovina but ICTY did not benefit too much from that cooperation" former ICTY spokeswoman Florence Hartman said in 2009.

In her book, Hartman reiterated that French intelligence protected Ante Gotovina rather than searched for him. While Gotovina was at large, sources from the ICTY reported to the media that Rondot met Anto Roso, Gotovina's friend from the Foreign Legion, several times to send him messages.

In his notes, General Rondot explained in detail how the French intelligence service had contacts with Gotovina. At that time, Daniel Markic was in charge of international co-operation of Croatian intelligence.  He was stationed in Brussels in 2001. But we need to go back to the wartime.

ENTRY OF THE TERRORISTS

At the time, Markic was an associate of Ante Gotovina and Ante Roso. He  also had contacts with French intelligence officer Rondot. Slobodan Praljak, a war criminal who committed suicide, posted wartime documents on his website. One such document, dated December 1993, stated that Markic was a person who let convoys towards Central Bosnia pass.

It was in this period, and precisely via routes through Central Bosnia, that a number of foreign fighters connected to al Qaeda terrorist group entered the territory of Bosnia and Herzegovina. In 1994, Daniel Markic was an officer of the Croatian intelligence service, led, at the time, by Franjo Tudjman's son Miroslav.

A Saudi citizen, Ahmed Zuhair Handala, showed up in Zagreb that year, and the then security services of the Republic of Croatia issued an official ID card in his name on 5 December 1994. Three years later, Handala orchestrated and executed the first terrorist attack in Bosnia and Herzegovina. On 18 September 1997, twenty minutes before midnight, an explosion injured 29 people in Splitska Street.

The trial to Handala and his aides Ali Ahmed Ali Hamad and Bebili Ali Hilo began in 1998, but the organizer of the terrorist attack had already fled BiH. He was later captured by the US Army in Afghanistan and transferred to Guantanamo.

While the French intelligence was closely cooperating with former legionnaires in Zagreb, Lionel Dumont, a French national affiliated with the al-Qaeda terrorist group, entered the territory of BiH through Croatia. French nationals, Malud Bugelan and Abdulah Bedr aka Biniam Zeferini, arrived with him too.

Having fought as members of El Mujahid units during the war, in 1997 they carried out armed robberies at a gas station and weapons shop in Zenica, killing a police officer and a security guard. Later, in a police operation to arrest the three French robbers, Biniam Zeferini was killed, while Lionel Dumont managed to escape the Sarajevo prison a few years later. In June 2003, by a UN Security Council decision, Dumont, a French national, was designated as one of Al Qaeda's associates.

As we already explained, he entered the territory of BiH through Croatia, whose officers at the time had good relations with the French intelligence officers, who also met with Daniel Markic, the current director of the SOA.

"Finally, what matters the most - several high-ranking Croatian intelligence officers warned us that Daniel Markic is allegedly still in very good relations with the French intelligence service," Zagreb's Jutarnji List published on 3 April 2016.

Shortly after Daniel Markic took over as the director of the SOA, Croatian President Kolinda Grabar Kitarovic said that "several thousand fighters of the so-called Islamic State are returning to BiH". A year later, in September 2017, the Croatian President, according to information provided by SOA, informed the public through her Cabinet that "between 5,000 and 10,000 persons close to Salafi movement, who could be described as radicals nurtured on "Islamic fundamentalism" operate in BiH.

And then SOA launched a covert operation, intending to stage a terrorist attack in BiH. For months, as Žurnal published, they pressured BiH citizen H.Č. who worked in Slovenia. They requested him to transfer weapons from a masjid in Zenica to Doboj. Shortly before the operation begun, H.Č. informed the security agencies in BiH about the plan. Žurnal published the story in March 2019.

"We spoke with H.Č. and we know who he is," said Daniel Markic on 21 March 2019, acknowledging the affair with that statement.

In that period, dozens of BiH citizens publicly testified that they were harrased and forced to co-operate with SOA. One of them testified that SOA officers were forcing him to spy on the Salafi community in Gornja Maoča. However, the BiH Prosecutor's Office, led by a Croatian citizen Gordana Tadic, declined to investigate the case. Only a month before Žurnal published that SOA intended to stage an act of terrorism in BiH, Russian Ambassador to BiH, Petr Ivancov, met with the Chief State Prosecutor of BiH. He would later call the entire SOA story a fake one.

"I am familiar with Žurnal's sources. As far as I am concerned, Žurnal is not credible. There were several situations when Mr. Avdić became involved in internal political procedures and processes. Do you remember the affair with the Croatian intelligence? He somehow managed to mix everything up, claiming that the case happened weeks after the Russian Ambassador met with Gordana Tadic and that we had planned all of this. That's nonsense", Ivancov said on television N1 in June this year.

Shortly afterwards, the Croatian authorities continued putting Bosnia and Herzegovina and terrorist groups in the same context. During her visit to Israel in July this year, the Croatian president said that "BiH is under the control of militant Islam, which is dominant in shaping opinions." Next day, Kolinda Grabar Kitarovic denied this statement, published by the Jerusalem Post.

Three months later, French President Emanuel Macron, said in an interview to Britain's The Economist, that "BiH is the time-bomb that's ticking right next to Croatia, and which faces the problem of returning jihadists." In the same interview, Macron said that the NATO alliance is in a state of brain death. His statements were welcomed by Russian officials and Milorad Dodik. In September this year, the French ambassador to BiH called for a "lenient policy on Milorad Dodik", currently a major Russian player in the Balkans, at a session of the Peace Implementation Council.