Western leaders seek stability and security in the Western Balkans even while viewing several states as unprepared for EU membership. Putin is seeking Balkan allies or supplicants. This is where the economic and energy dimensions are most pronounced in corrupting, blackmailing, or bribing key officials

Western leaders seek stability and security in the Western Balkans even while viewing several states as unprepared for EU membership. Putin is seeking Balkan allies or supplicants. This is where the economic and energy dimensions are most pronounced in corrupting, blackmailing, or bribing key officials

Bosnia-Herzegovina has become Moscow’s geopolitical hostage in the Balkans. Vladimir Putin’s Kremlin has developed an extensive array of tools in pursuing its anti-Western offensive and  several are now deployed in the Western Balkans to maintain Bosnia as a frozen state with an unresolved internal conflict that can be incited to Russia’s advantage.

Western leaders seek stability and security in the Western Balkans even while viewing several states as unprepared for EU membership. In stark contrast, Moscow fosters instability and insecurity, as this helps achieve four major goals. 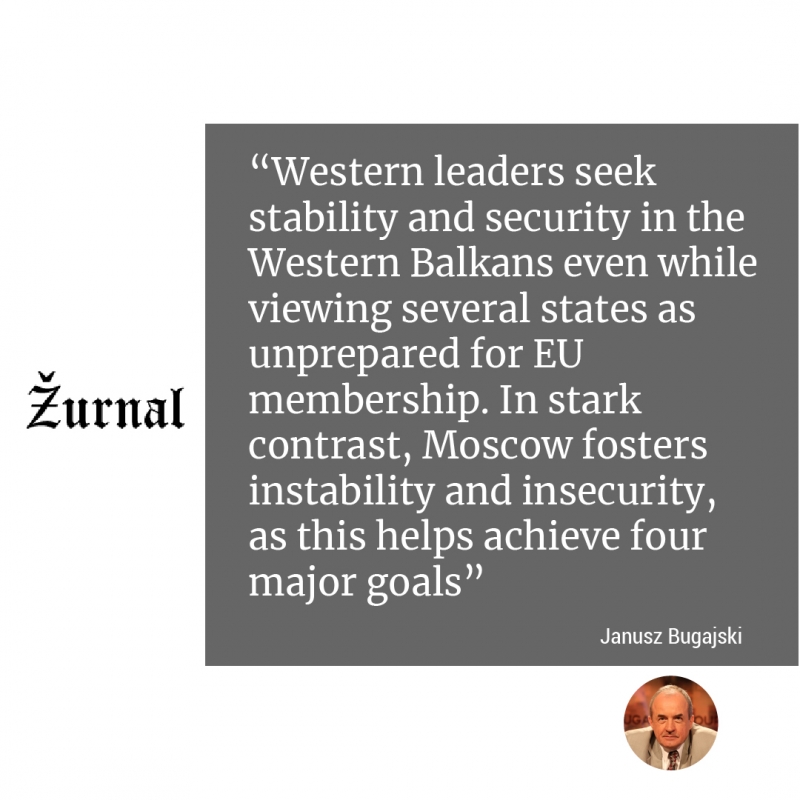 First, it can expand Russia’s geopolitical reach. Historically, the Balkans are a stepping-stone to the Adriatic and Mediterranean and an inroad into Central Europe. Moscow’s influence over Balkan governments, including those of Serbia and Bosnia’s Republika Srpska, its role in multi-national formats (such as the Peace Implementation Council in Bosnia), and its military presence (as in Serbia) provide it with growing regional influence.

Second, Moscow aims to fracture Western cohesion. Fomenting conflict in the Balkans not only contributes to unsettling the region, it also weakens Western unity. One recent example was the territorial exchange gamble between Serbia and Kosova supported by Moscow and accepted by some Western officials. Even debates about partition created rifts in the region and between Western governments. Fanning local disputes can assist Moscow in undermining Alliance unity and promoting Western policy disarray. Unresolved conflicts and disputed states also enable the Kremlin to claim that NATO has failed to stabilize the region.

Third, the Kremlin wants to remove the U.S. presence. The main reason for obstructing NATO enlargement is to prevent American military deployments and preclude any firm security guarantees. Moscow prefers that Balkan states not join the Alliance as this enhances Washington’s role in defending Europe. It also asserts “legitimate interests” in gaining a stake in Europe’s security architecture. In practice, such proposals challenge NATO’s existence, as evident in Moscow’s European Security Treaty drafted after its invasion of Georgia in 2008. This proposal claimed that Russia could guarantee the security of Europe’s east. It was rejected by every state but the primary goals of Kremlin revisionism have remained unchanged.

And fourth, Putin is seeking Balkan allies or supplicants. This is where the economic and energy dimensions are most pronounced in corrupting, blackmailing, or bribing key officials. The latter can thereby assist the Kremlin by stirring inter-ethnic conflicts, opposing Western initiatives, and supporting Moscow on the international arena.

Moscow’s business investments are targeted for maximum political impact. It gained a major foothold in Serbia through energy buyouts, media saturation, political corruption, and a military presence at its self-styled “humanitarian center” in Nis. Serbia and Bosnia have remained 100% reliant on Gazprom for gas supplies and have done little to diversify through regional interconnectors or alternative import contracts with non-Russian suppliers. Serbia has signed a memorandum of understanding with Hungary on the continuation of TurkStream, while Serbiagas announced that this gas pipeline would be extended to Republika Srpska and possibly to the Bosnian Federation.

Inadequate privatization has also left most of Bosnia’s oil refining business in the hands of Russia’s state-owned company, Zarubezhneft. And instead of investing fresh capital into the BiH oil industry, Russian companies have siphoned money out of RS and brought the industry to the edge of bankruptcy. Such maneuvers give Moscow even greater leverage with Banja Luka by pressing the government into making further deals that benefit the Kremlin. 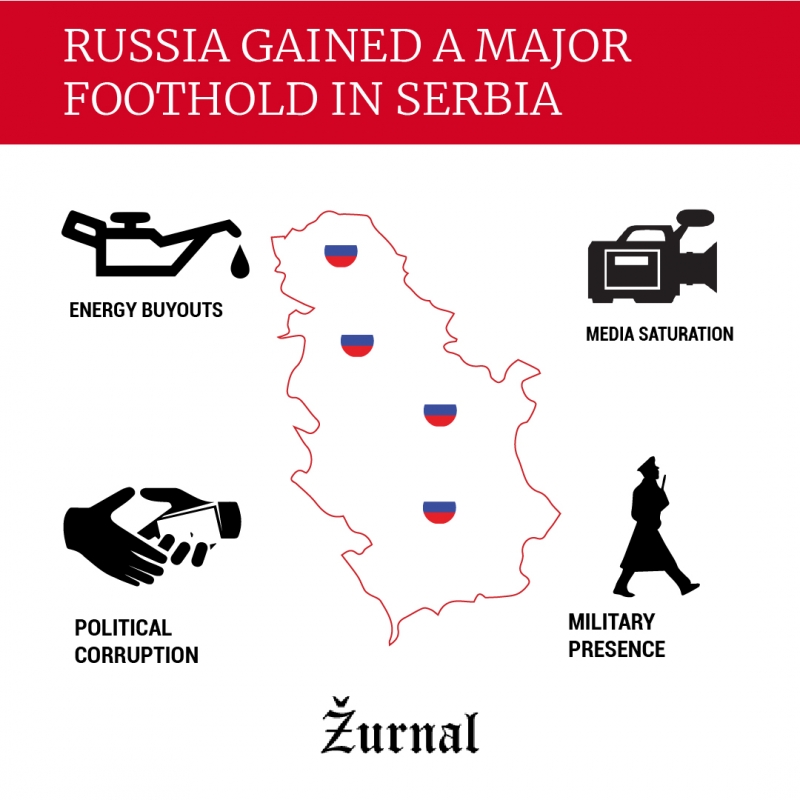 Zagreb is also useful for Russia in keeping Bosnia off balance. Nationalists in the ruling Croatian Democratic Union (HDZ) in both Croatia and Bosnia view Russia’s presence as an opportunity to buttress their claims to a third Croatian entity in Bosnia. Indeed, Serb and Croat leaders collaborate in weakening the central government in Sarajevo.

Moscow consistently defends Bosnia’s quasi-separatist Serbian entity on the international arena and may support outright secession. RS is valuable for Moscow as a wedge in the middle of the Balkans against both NATO and EU enlargement. In a worst case scenario, Moscow could encourage Banja Luka to declare its independence in order to test Western resolve. If the diplomatic and military response proved weak and divided Russia could recognize the new state, as it has with Abkhazia and South Ossetia in Georgia’s occupied territories.

Russia could also pull Serbia and Croatia into a Bosnian conflict and further distance Belgrade from EU membership. This would have a negative impact on all neighboring states by mobilizing and radicalizing various populations, including Bosniaks, around their national identity, statehood, and territory. The Kremlin would then seek to exploit and benefit from the ensuing clashes.