In 2020, Dodik's minister Srđan Rajčević met with Tamir Parda, former director of MOSAD and chairman of the board of 'XM Cyber', after which the then member of the BiH Presidency admitted that he was eavesdropping on the opposition. The RS government later signed a memorandum on the establishment of a cyber academy with the Israeli company "Elta Systems", which specialized in espionage.

Written by: Žana Gauk Objavljeno: 24. prosinac 2022. 14:45
Dodik and Rajčević at a meeting with representatives of "Elta Systems"

"'Do you want me to bring you the recordings? There is no government that does not listen to the opposition, so we listen to you. We have the right and we listen to you. We know what you are doing," said Milorad Dodik, the then-member of the Presidency of Bosnia and Herzegovina, on May 20, 2020, at the session of the National Assembly of Republika Srpska.

Two and a half years later, on November 8 of this year, it was agreed that the Israeli company "Elta Systems LTD" would supply him with software for para-intelligence work, called the solution for establishing a cyber academy. 7,322,628 KM!

Citizens will pay for this idea to the leader of every totalitarian system on the basis of "Memorandum of Understanding number: 01/1-012-2-1483-1/21 dated 05/24/2021 and Annexes A and B, which the Government of Republika Srpska concluded with 'Elta Systems' Israel with the aim of establishing a cyber academy, which will train and equip candidates to acquire knowledge and skills in the field of cyber security".

The negotiation process was conducted without public notice by the Innovation Center of Banjaluka, headed by another henchman of the regime - Drago Gverić. The contract will be in force for four years.

The memorandum is currently a closely guarded secret, the specification of hardware, software and other equipment as well. Who will be the candidates for training and why was the military company engaged - these are questions that Žurnal is still waiting for answers from Gverić, the RS Government and the Ministry of Science and Technology Development, Higher Education and Information Society of RS. 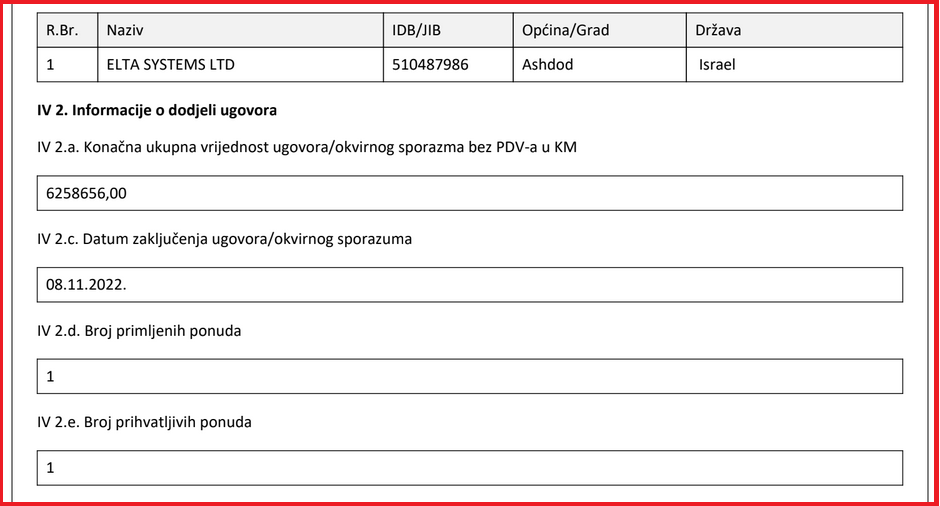 However, the meeting held on September 15 confirms that all this is extremely important to Dodik, now the president of Republika Srpska.

"Member of the BiH Presidency Milorad Dodik and the Minister of Science and Technology Development, Higher Education and Information Society of the RS Srđan Rajčević met today with the delegation of the Israeli company 'Elta Systems', which consisted of the director of the marketing and business sector and the representative of this company for Europe Roi Šopošnik and the director of the Singapore department of this company, Doron Koen. The topic of the meeting is the initiation of activities to establish a cyber academy under the auspices of 'Elta Systems' in Banja Luka, where profiles in the field of cyber security and defence would be trained," the media announced.

"We have reached an agreement with the representatives of this respectable Israeli company on the establishment of an academy in the field of cyber security in RS. This is another proof of our determination that in the RS, in cooperation with Israeli experts, we are training personnel for the future, because it is assumed that this industry will lack more than a million executors from the field next year already", he said. 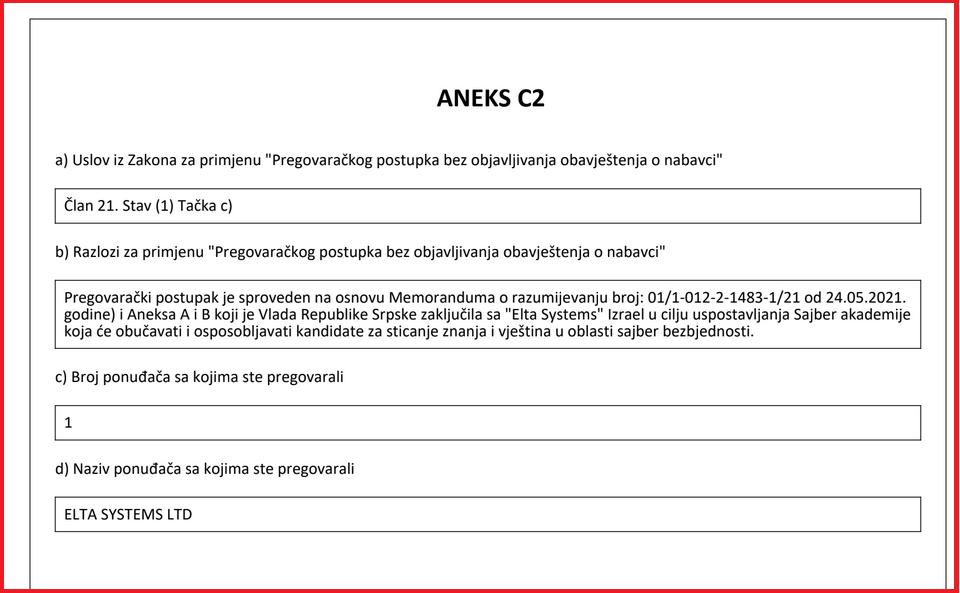 After this, the question remains whether the "cyber academy" is a cover for the establishment of a cyber intelligence system.

INFRASTRUCTURE OF ISRAEL, ACTION OF RUSSIA

"The Minister of Science and Technology Development, Higher Education and Information Society Srđan Rajčević met with Tamir Parda, former director of the Israeli intelligence service MOSAD and current chairman of the board of the company 'XM Cyber', which deals with the creation of systems for cyber defence and security, as part of a multi-day visit to Israel. The details of the conversation are not known. Tamir Pardo took over the position of director of MOSAD in 2011 after Meir Dagan and held the position until 2016 when he was succeeded by the current director, Josi Koen. Pardo is known for the introduction of new technologies in the Israeli intelligence sector, as well as the creation of MOSAD's technology-research centre," the "Srpskainfo" portal announced exactly four months before Dodik's confession about illegal wiretapping of the opposition.

On March 19, Sandi Dizdarević, a security expert and professor at the University of Modern Sciences in Mostar, warned the public about para-intelligence work and procurement of equipment for spying and control.

"Now in Bosnia and Herzegovina 'behind the curtain' we have offensive intelligence and psychological propaganda games on the one hand, and political games on the other. Intelligence games are undercover. He or they are actually coordinators who, through various NGOs, institutes, higher education institutions, and individuals within the official security structures, have the task of making the penetration and survival of Russian influence in BiH, primarily in RS, and the ultimate goal is destabilization in BiH and the creation of an independent Republika Srpska", he said.

Western intelligence services also have material evidence of this.

"The most dangerous direction of Russian influence is para-intelligence activities, which in this case takes place through one of the higher education institutions in Serbia, which is managed by a professor of Marxism, who currently teaches sociology, and whose code name begins with R. Precisely through that faculty under the agreements regarding the cooperation with the Russian faculty, a direct connection is realized both ideologically and intelligence-wise, as well as economically and financially", Dizdarević revealed and added that "this institution is under the direct control of the Russian military intelligence service".

"Professor with the code name R. is directly responsible to the Russian colleague VF. The third connection takes place through the faculty in the RS and high-ranking persons from that faculty. What is particularly interesting in these types of partial intelligence modus operandi are extremely well-designed screens, so let's say that I make a parallel between the events in North Macedonia and BiH, more precisely RS. The same company installed software equipment at a college in North Macedonia that was used to monitor and eavesdrop on supporters of Zoran Zaev. The same equipment was also installed at one of the colleges in the RS, under the guise of creating subjects and chairs for the study of cybercrime. It is very sophisticated equipment from 'Elta Systems LTD'. The equipment has exceptional capabilities."

And that faculty, it is clear, is the one for security and protection managed by Dodik's intelligence officer Predrag Ćeranić. He didn't have time for Žurnal, and when we told his secretary what it was about, there was confusion and a short message followed: "I'll pass it on to him".

And after that – silence.

Dizdarević further clarified in the media:

"Within these institutions, under the guise of a 'cyber academy', illegal activities such as wiretapping, monitoring, blackmail, threats, compromises, up to the creation of networks of their informants, collaborators, and analysts are carried out. The goals are multiple, to achieve Russian dominance, and that means remaining individuals in power for as long as possible, this again means the enrichment of these individuals, because through them the domination of the other party, which is the Western system, and their values is prevented in a political sense. So, it is not about official security but about educational institutions that through education, student exchange and other activities, have installed equipment for eavesdropping, but also an established and branched network for monitoring, such as NGOs, various associations", he concluded.

When asked why the government aimed to publish information about the signing of the famous memorandum, the security guards contacted by Žurnal answered - that what was done illegally, it is easiest to "package" it in contracts and memorandums.

They also confirmed Dizdarević's words - the infrastructure is Israeli, but everything is carried out by the Russians.

The radars containing the technology of the ELM-2084 family of radars, developed and manufactured by the Israeli company ELTA, will replace the old Soviet P-37, PRV-17 and ST-68UM radars in use today in the Hungarian army. Multi-purpose radars (M-MMR and F-MMR) were delivered to Hungary this year, based on the Memorandum of Understanding signed between the Commissioner of the Hungarian Government Gáspár Maróth and the president and general director of the company "Rheinmetall Canada Inc".

In addition to the Israeli radars, Hungary also had the Israeli "Pegasus". In January of this year, "Deutsche Welle" wrote that the governments of Poland and Hungary are eavesdropping on critics with so-called software. Those tapped in Hungary decided to sue the state.

In the spring of 2021, Szabolcs Panyi learned that the "Pegasus" spyware was installed on his smartphone.

"It was known that this software could do much more than simple eavesdropping and recording of conversations. He has access to all data from the phone and can seamlessly turn on the camera and microphone. "I felt as if they had broken into my apartment or office, as if they had secretly placed microphones and cameras everywhere and were following me to the bathroom", said this Hungarian investigative journalist.

In July 2021, an international research network published 50,000 phone numbers worldwide that were processed by Israel's Pegasus "NSO Group". In Hungary, 300 numbers were monitored electronically, and journalists, lawyers, political activists, and entrepreneurs were spied on…

26th of April this year:

She also asked who are the persons being trained.

"Translated, this means how to use spyware, malicious software to monitor and terrorize law-abiding citizens of our country," she pointed out, and then concluded: "'Elta' is a private company." This is not an agreement between governments. The government of Trinidad and Tobago, therefore, facilitates the training of a private military company which, among other things, specializes in espionage".

Citing an Israeli newspaper article titled "Israelis behind the most sophisticated surveillance program in history that infiltrated Apple", Persad-Bissessar said the Israeli government considers its surveillance software nothing more than a weapon, whose export is controlled by the Ministry of Defense. 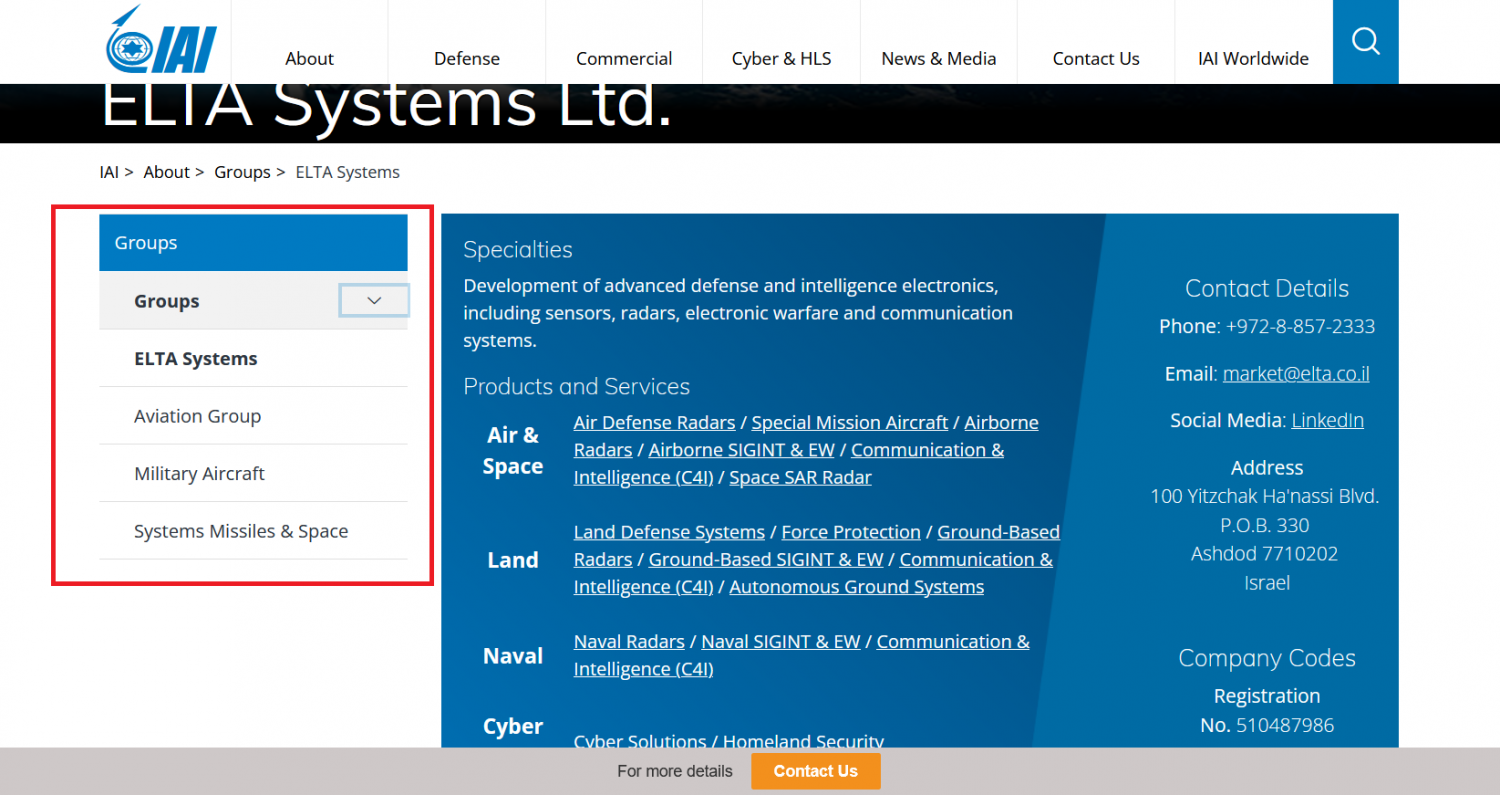 "I bet the government will come to tell you tomorrow that monitoring training is being conducted to build cyber security capacities to protect critical information infrastructure", she pointed out.

By the way, back in 2017, the "Jerusalem Post" announced that the police had arrested 13 people, including retired IDF Brigadier General Amal Asad, on corruption charges related to "Israel Aerospace Industries" (IAI), Israel's largest state-owned aircraft manufacturer. ownership, in which "Elta Systems" also operates.

Asad, who was a member of the Board of Directors of IAI, is suspected of accepting bribes. The investigation lasted a year.

"Cyber academies", say IT experts, are established for defence, but also for cyber attacks. The security guard Ćeranić, as well as the Banja Luka Innovation Center, the Government of the RS and the competent ministry, are also responsible for who Dodik will direct his activities.

However, there will undoubtedly be more information…

INTO THE NEW YEAR WITH NEW PRESSURE: Citizen/collaborator in the fight against Žurnal