Written by: Svjetlana Šurlan, Dejan Tovilović Objavljeno: 13. siječanj 2021. 15:46
The Russian investors, who had bought the factory “Energoinvest – Switchgear” (E-RAOP) from Istočno Sarajevo, were promised millions worth tenders even before purchase of the factory, and documentation for them to win these tenders after they start their business operations in BiH had been prepared, claims one of the investors Dmitri Kuznetsov.
After Russian citizen, Dmitri Kuznetsov, had at the end of October this year revealed how the sale of E-RAOP factory was fixed for a group of Russian investors in 2013 by the people from the Government of Republika Srpska, he now decided to disclose more details.
Kuznetsov earlier said that Russians had brought several millions marks worth bribe to BiH, which is being investigated by the Russian services.
“The investigation has been ongoing here for half a year already; the services are surveilling money coming to and going out of Russia. They are focused on that. The Federal Security Service (FSB) is dealing with this type of thigs, but I could not say exactly which department. They are investigating bribery, corruption and white-collar crime”, claims Kuznetsov.
He points out that none of the prosecutor’s offices from BiH has said anything about the investigation in Russia on involvement of its citizens in the illegal activities in BiH.
“Russia has no right to interrogate people on your territory or even your people until your prosecutor’s office offers to provide assistance in this direction. Only then they will be able to exchange the information”, says Kuznetsov.
Kuznetsov revealed the messages from which, as he claims, it can be seen that Milan Keserović, son-in-law of the then RS Minister of Finances and the current Chairperson of the BiH Council of Ministers, Zoran Tegeltija, is informing the Russians, even before they had purchased E-RAOP, that the tenders in Republika Srpska have been fixed for them.
“The correspondence clearly indicates who was involved in what. It can be seen that even before the factory was bought Keserović had organized it, namely, they forced the directors of the company to give us tenders circumventing all statutory procedures. Not all operations are in the correspondence, there were more. There was a contract of 37 million; there were also smaller contracts, million Euro and half a million Euro worth, but there were many of them”, points out Kuznetsov.
He adds that this, but also other messages, prove that Keserović is proposing to investors documents for tenders that have already been prepared, and at the same time the tenders have not been published yet.
“All documents have already been prepared for the investors and other companies were included so that everything would be in line with the rules”, stresses Kuznetsov
He claims that he and other Russian investors were in constant contact with Keserović, his brother Mario and the then RS Minister of industry and energy Željko Kovačević, whose son-in-law is Mario.
“I can also send you correspondence, when we were coming, bringing gifts, the three of them responding to the texts, we were texting on the plane, they texted us who will be waiting for us. We were very close”, says Kuznetsov.
(Kuznetsov and Kovačević)
He adds that it is significant that Keserović initially introduced himself to him as Assistant/ Deputy Minister of Energy.
“I thought it was his position for a month or so, until I realized it was not the truth”, points out Kuznetsov.
He adds that everything involving “Elektroinžinjering”, which was purchased by E-RAOP, was just on paper.
“It was all a bluff. An organizational unit called the Overhaul Brigade, or the repair team, was formed, but it was all just on paper, just a bluff”, points out Kuznetsov.
Keserović avoids answering concrete questions
Earlier Kovačević said that he and his family have no relations with Kuznetsov, although photos and footages show that they have socialized even at a private estate.
Keserović is not answering the question if before the sale of E-RAOP he had forwarded information on millions worth tenders that are “fixed” for “Elektroinžinjering” once “E-RAOP” is bought.
He calls Kuznetsov’s claims nonsense and slander.
Kuznetsov’s response to allegation of Kovačević and Keserović is that “he has no ulterior motives”.
“I am not afraid of anyone and I had started talking about that in 2013 already, because I came to develop the factory, to make everybody’s lives better. I did not want to have people left without money and job”, says Kuznetsov.
He announced that soon he will reveal the events that happened in Vrnjačka Banja, when the Russians handed over “a gift” to people from Republika Srpska.
“Everything that happened in Vrnjačka Banja happened in the wine cellar where official guests, i.e. foreign delegations, are received. The Russians brought a gift which they handed over in the yellow building where official guests are received in the wine cellar. I, (Sergey) Areshkin, (Valery) Arapov, (Milan) Keserović and three other people were in that room”, said Kuznetsov.
The event he is talking about coincides with the International CEDEF Energy Forum held on September 19 and 20, 2013 in Vrnjačka Banja. Kovačević and a representative of "Elektroinženjering" were at the forum, which is proved by the official program of the forum, but also by photos from that event.
Kuznetsov says that Keserović was in Moscow at the beginning of August 2013, before purchase of E-RAOP, in order to make arrangements about that deal.
“That is why he came to Moscow by plane. He came to Moscow for two days, met the investors and there they had reached final agreement. He left on August 7, 2013. He came alone, stayed at the hotel “Metropol”, which is one of the most expensive hotels in Moscow, located at the Red Square. He knew his way around Moscow very well,” says Kuznetsov.
The question about the “gift” Keserović ignores, as well as the question if it is true that before sale of the factory he was in Moscow, beginning of August 2013, in order to make final arrangements. 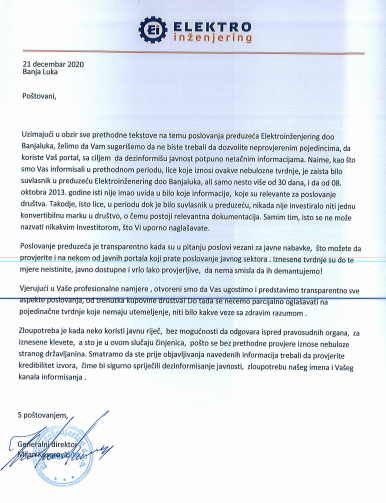 Kuznetsov wrote to Dačić
Kuznetsov says that he had on November 25, 2013, personally written about everything to the then Prime Minister of Serbia, Ivica Dačić, asking him to intervene because there was no one in BiH who would stop the irregularities regarding E-RAOP.
“I sent a letter fully describing everything that was happening with E-RAOP factory. Everything was explained in the letter. There was no response”, says Kuznetsov.
Translation of the message sent to the minister of Serbia
“The Russian side entered into an agreement together with Mr. Milan Keserović, who, by himself, arranged with the Government of Republika Srpska the affair of the purchase of the "Energoinvest" factory. Keserović's younger brother is the husband of the older daughter of the Minister of Energy of Republika Srpska. The Russian side did not even plan to invest in "Energoinvest" factory and to pay the debts to the workers. During the purchase of the factory, it was agreed ... million Euros and that the value of the factory's assets and documentation would be reduced to a minimum and divided into two parts. The first part is the purchase of immovable.... "
We had sent a letter with questions about Kuznetsov’s allegations to Dačić’s office on December 25 last year, but there was no response. We sent the letter again on January 3, but again no response was received.
Just to remind, in an interview for CAPITAL portal  at the end of October Kuznetsov said that the representatives of Republika Srpska received a several millions mark worth bribe for the Russians to buy RAOP, that the sale of the company's assets was planned in advance, that he received death threats, and that an investigation has been launched in Russia.
(zurnal.info)
dmitri kuznetsovriussiane-raop
Žurnal in English