BE THE CHANGE (VIDEO):: More than 20 thousand activists are trying to protect the rivers of Bosnia and Herzegovina

In February 2020, Safet Kubat founded the Rijeke Bosne i Herzegovine "Budi promjena" (Rivers of Bosnia and Herzegovina “Be the Change”) Facebook group because he could no longer see garbage in rivers and nature. He wanted to do more to solve this problem. Since then, he has motivated more than 20,000 people to take Facebook activism to the streets and create a real environmental movement. Activists and members of the group organized 3,500 actions to clean rivers and green areas, planted about 90 thousand trees and released more than 100 thousand fish younge into rivers and wild streams throughout BiH

Safet Kubat has been involved in ecology for more than 13 years, both through his academic career and through social activism. There are two events that left a deep mark on him and which were the reasons why he wanted to change people's consciousness when it comes to nature protection through the Facebook group.

A few years ago, Kubat mapped the locations of illegal landfills in the area of the Zenica-Doboj Canton. Then he met a man with a cart loaded with garbage, who passed by the container, continued through the forest, on a goat path, to unload the cart full of garbage in the forest above the source of drinking water that he probably drinks himself.

- After that inhuman act, he was happy, as if he experienced some kind of anti-stress. At that moment I became aware that it is a transgenerational problem, that it is passed on from generation to generation and that it is completely normal for people and even unfortunately commendable, says Kubat, stating that the second reason that motivated him to act was the incomprehensible behaviour of one part of the Bosnian diaspora. There have been situations, explains Kubat, where when our people go outside they are the most environmentally conscious citizens, they never throw a cigarette on the street, and when they come to their homeland they go to the extreme.

- These are the things that made me want to understand what kind of mentality we are facing in Bosnia and Herzegovina and what is needed from a series of activities to bring about a certain change. Those two things initiated, however, the garbage around us was like in the story. My sincere desire to solve this problem eventually resulted in the creation of a real eco-movement, says Kubat.

"Be the change" you want to see in other people

The group had three key messages that invited members to take action with picture-publish, picture-report and picture-do. The principle was simple, if you see someone throwing trash, take a picture and post it on the group, when you've done that, report it to the inspectorate, and after the report, clean up the trash and post a clean location on the group.

- Along with this whole process, we educated the citizens on how and to whom they can report and, in the end, be the change themselves. This caused a great virality of posts on the group, so soon came larger organized activities of the group that included mass cleaning actions, says Kubat.

Activists and members of the Rijeke Bosne i Herzegovine "Budi promjena" group implemented three and a half thousand different cleaning actions in the territory of Bosnia and Herzegovina, planted more than 90 thousand trees, released 100 thousand fish young into rivers and wild streams, and raised more than 500 reports against natural and legal persons to the competent authorities, they put up a large number of signs, wrote petitions, put pressure on the institutions.

- A real ecological awakening has taken place, citizen activists are self-organizing, helping each other to bring about certain changes. So far, over 20 thousand people have responded to our actions. So after two and a half years, such a large number of people, it is no longer just digital activism, but concrete physical action. That's 20 thousand people who took some sort of physical action, says Kubat. 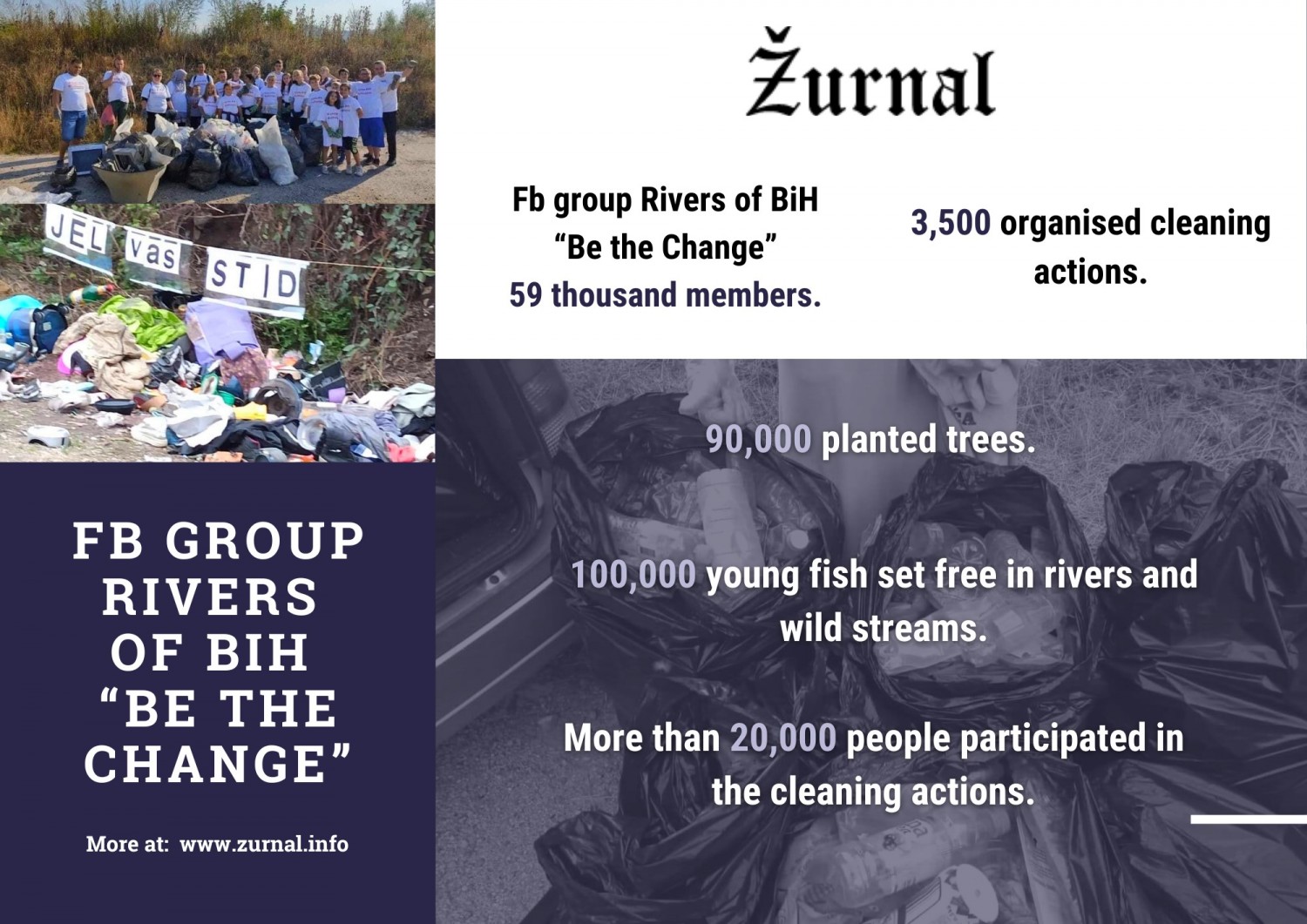 When organizing the actions and activities of the group, the competent institutions were a particular problem, Kubat explains, stating that "sometimes the institutions themselves are executed and they no longer know who is responsible for what, let alone the citizens".

- There were obstacles of a more administrative nature, sometimes it's a lack of will and sometimes it's also ignorance, which is unfortunately present in institutions. One of the problems is that this ignorance is denied, there needs to be a lot of wisdom in how to educate the people who are in the institutions and not only our citizens and activists, says Kubat, stating that they surprised the institutions with great civil pressure and that authorities from the institutions began to monitor the activities of the group so that sometimes they themselves take over and implement some things. 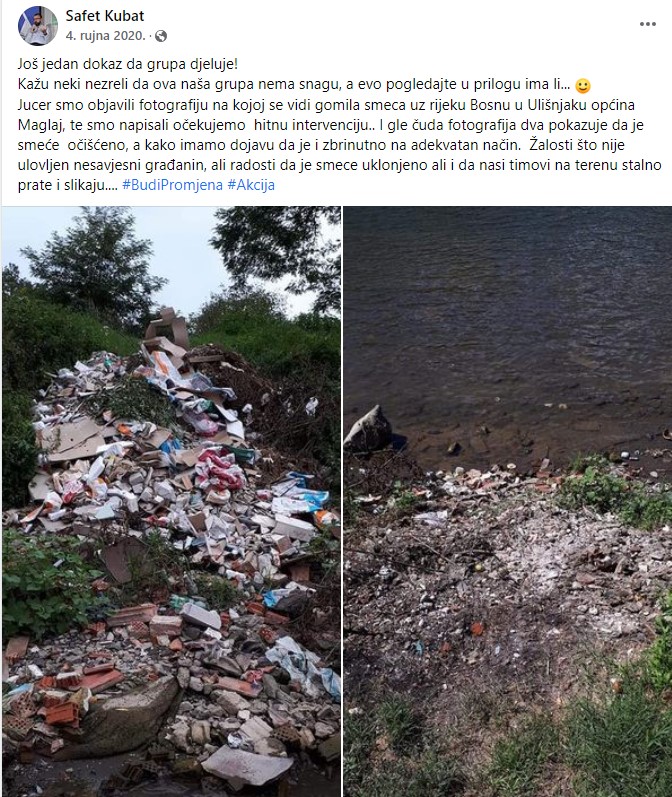 - We had a lot of success in the area of the municipality of Zavidovići where, in cooperation with the municipality and communal services, we did a series of activities, from putting up signs to removing illegal landfills. They listened to the voice of the people and this resulted in them reaching 100 per cent coverage of Zavidovići Municipality with garbage collection from 50 per cent, says Kubat. 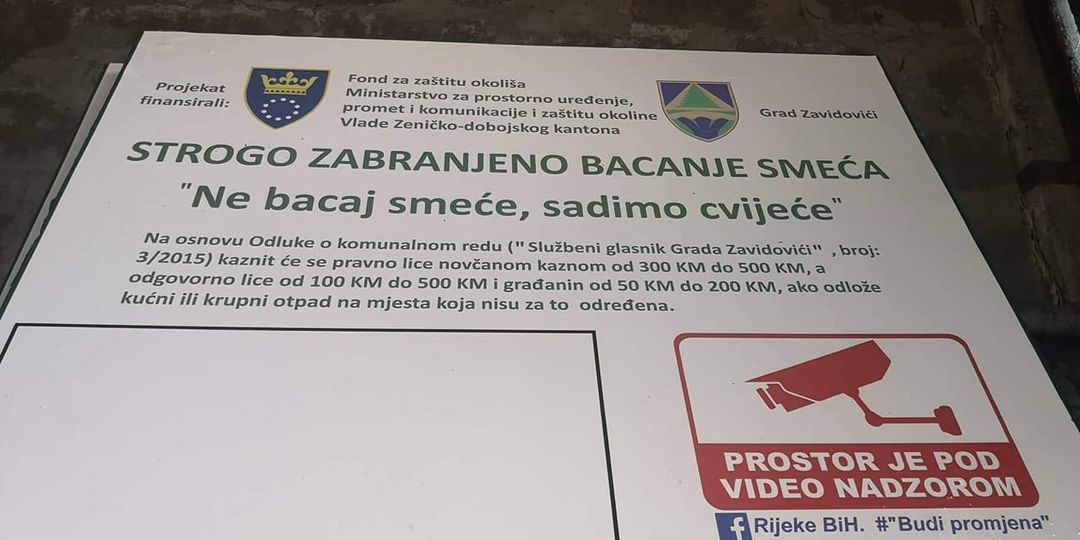 Be the change you want to see in other people, because everything starts and ends with the individual, says Kubat, when it hurts an individual to throw a cigarette on the road, it means that we have succeeded in changing consciousness, and when we change consciousness, we can also change the country.

THREATS, INSULTS AND MEDIA LYNCH: The suppression of freedom of speech in Vučić's Serbia
Pročitajte još
WHILE CITIZENS FIGHT FOR THE PROTECTION OF RIVERS: Politicians on the offensive against armchairs and natural resources
Budi promjena (Video): Više od 20 hiljada aktivista pokušava zaštititi rijeke Bosne i Hercegovine!