TAKEOVER OF THE COUNTRY: Russia is controlling import, refinement and distribution of oil in BiH

Written by: Slobodan Golubović Objavljeno: 03. rujan 2020. 11:21
Conditioned by relatively small and insufficiently explored oil reserves, Bosnia and Herzegovina is dependent on the import of this energy product in order to satisfy its energy needs. Therefore it represents an easy prey for the major strategic energy player – Russia, which, apart from the import, also has control over refinement of oil and petroleum products, and their distribution on the BiH market.
According to the data of the BiH Agency for Statistics, petroleum products account for more than 28% of the total energy consumption in Bosnia and Herzegovina, and the largest portion is spent in the traffic sector. Since the petroleum exploration and production sector is not developed, all oil at the market of Bosnia and Herzegovina comes from import. The official information of the Indirect Taxation Authority (ITA) reveals that approximately 9 million 600 thousand tons of crude oil (tariff number 2709) and 9 million 450 thousand tons of refined oil and petroleum products (tariff number 2710) were imported to BiH in the period 2009-2019.
When it comes to the import of crude oil, the data reveal that 98% is imported from Russia, while only 2% falls on other countries. 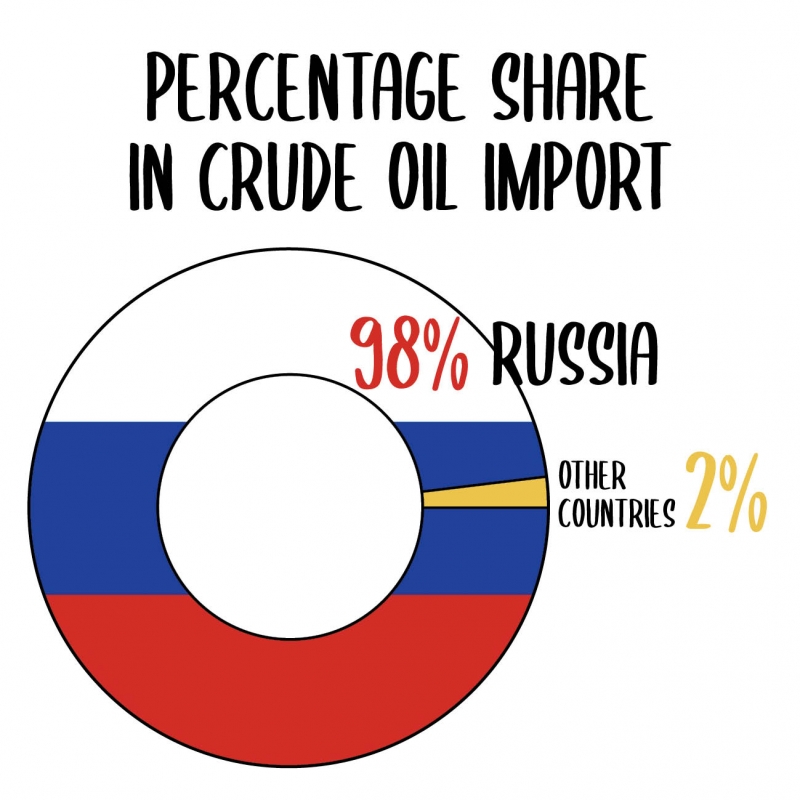 As regards imports of refined oil and petroleum products, Croatia is first making up 57%, followed by Italy 23%, Serbia 10%, Hungary 3%, Slovenia 2% and all other countries together 5%. 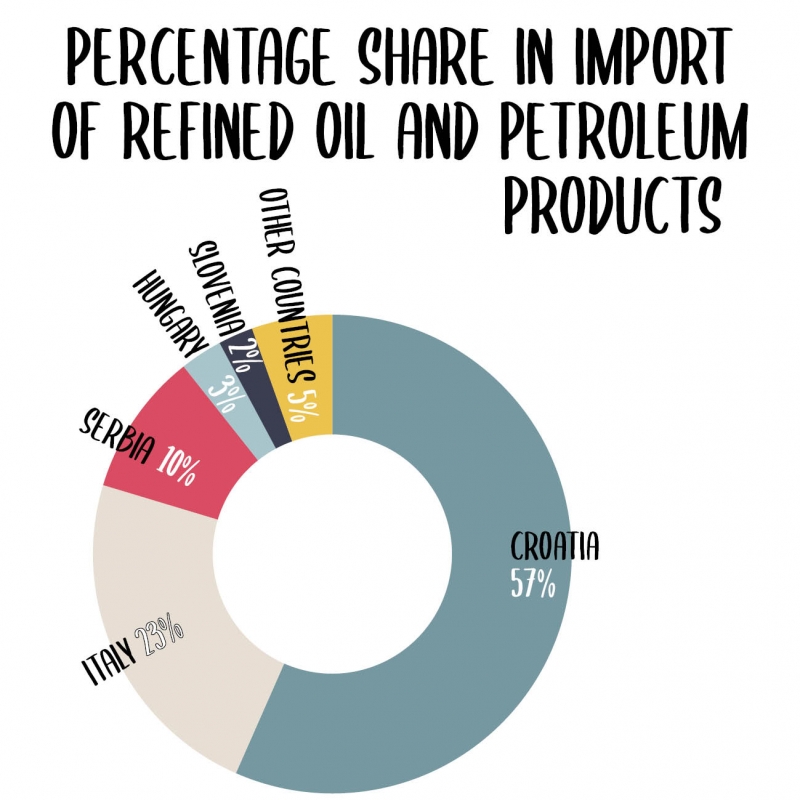 Even a superficial analysis of presented data, knowing the relations on the oil market in Croatia and Serbia, undoubtedly leads to a conclusion that the petroleum sector of Bosnia and Herzegovina is entirely dependent on Russia.
The background of dependence on Russia oil
As Žurnal has previous written, refinement of oil and petroleum products in Bosnia and Herzegovina is tied to two refineries: Oil Refinery in Brod and Oil Refinery in Modriča. The largest companies for distribution of oil and petroleum products in BiH are Nestro Petrol and Energopetrol. The majority owner of the two refineries and Nestro Petrol is the Russian company NeftGazinKor, and Energopetrol is majority-owned by the Croatian company INA in which Hungarian MOL is the majority shareholder through which the capital of the Russian company Surgutneftegas was running in the period 2009-2011 by way of 21.2% of the shares.
The petroleum industry in Republika Srpska is devalued and brought to the brink of collapse by privatization and a harmful contract with the British company Vitol in 2003. After coming to the power in Republika Srpska in 2006, Milorad Dodik and SNSD did not have many options concerning the petroleum industry. The only two options were sale under unfavorable conditions or bankruptcy. The Law on Privatization of State-Owned Capital was amended and a protocol on sale of Republika Srpska petroleum industry signed with the Russian company NeftGazinKor without any knowledge of the public. The Contract on sale of Oil Refinery in Brod, Oil Refinery in Modriča and distribution company Petrol, worth 236 million KM and shrouded in the mystery, was signed on February 2, 2007 in Banja Luka. The buyer committed to meeting the following contractual obligations: processing of crude oil in the amount of 4.2 million tons annually, processing of oil and lubricants in the amount of 130.000 tons annually, placement of petroleum products through the distribution company in the amount of 2.500 tons annually, construction of a railway between the Oil Refinery in Brod and Oil Refinery in Modriča, keeping the existing number of employees…Most of the assumed contractual obligations have never been fulfilled. 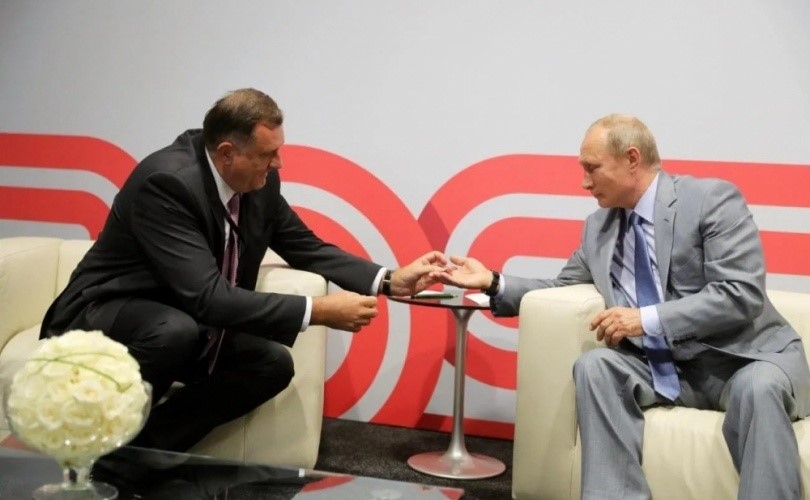 According to available information, 40% of the company NeftGazinKor is owned by the Russian national company Zarubežnjeft, and the remaining 60% is equally shared between three legal entities, one of which is registered in the “offshore zone” in the British Virgin Islands. There is reasonable doubt that the persons from the Balkans are behind it.
NeftGazinKor established company Optima Group in 2008 in Banja Luka, all for the purpose of controlling the entry and the exit of crude oil and goods from the refineries and distribution companies. According to the writing of the Radio Free Europe from 2014, the Oil Refinery in Brod, Oil Refinery in Modriča and distribution company Nestro Petrol are experiencing enormous business losses. Optima Group has a turnover exceeding 1.2 billion KM; is the third strongest company in BiH and is on the list of 500 largest companies in the Central Europe. This all justifies the suspicion that Optima Group is a mere intermediary to generate extra profit through the papers or, more simply, to extract money from the RS petroleum sector.
On December 31, 2019 the accumulated loss of the Oil Refinery Brod amounted 742.397.977 KM, Oil Refinery Modriča 63.745.619 KM, and Nestro Petrol 9.774.506 KM. The key reasons of debt accumulation in the petroleum sector, according to the research of Radio Free Europe, are insufficient quantities of produced oil and petroleum products and high transportation costs due to lack of infrastructure (promised railway between Refinery in Brod and Refinery in Modriča), and it all underpins the thesis that Russia’s investments in the petroleum sector in BiH are a political rather than a commercial project. According to the available audit reports, capability of these companies to continue their operations depends on continuous financial support of the parent company, and that is Russian Zarubežnjeft. It means that they have been “keeping alive” for years now thanks to the financial injections from Russia.
The Russian influence on the petroleum sector in the Federation of BiH is no less than in Republika Srpska. The FBiH Government had in 2006 passed a decision on recapitalization of the company Energopetrol, the largest company for distribution of oil and petroleum products. It was done by selling 67% of the ownership interest to INA (Croatia) and MOL (Hungary) consortium, while the remaining 22% is owned by the FBiH Government and the small shareholders own 11%. Surgutneftegas, a company from Siberia that according to the press reporting has very close ties to the Russian leadership, became a shareholder of the Hungarian company MOL in 2009. The majority owner of the Croatian company INA is the aforementioned Hungarian MOL, which holds 47% of the shares. INA bought MOL’s ownership interest (33.5%) in 2016, and already in 2018 it became the owner of 88% of Energopetrol shares through recapitalization. The ownership share of the FBiH and the small shareholders dropped to 8% and 4%, respectively. According to the last available financial report, the accumulated loss of Energopetrol is 215.515.632 KM; the company’s operations depend on INA, and INA’s operations are dictated from Russia, although Hungary in 2011 repurchased the shares of Surgutneftegas in MOL. 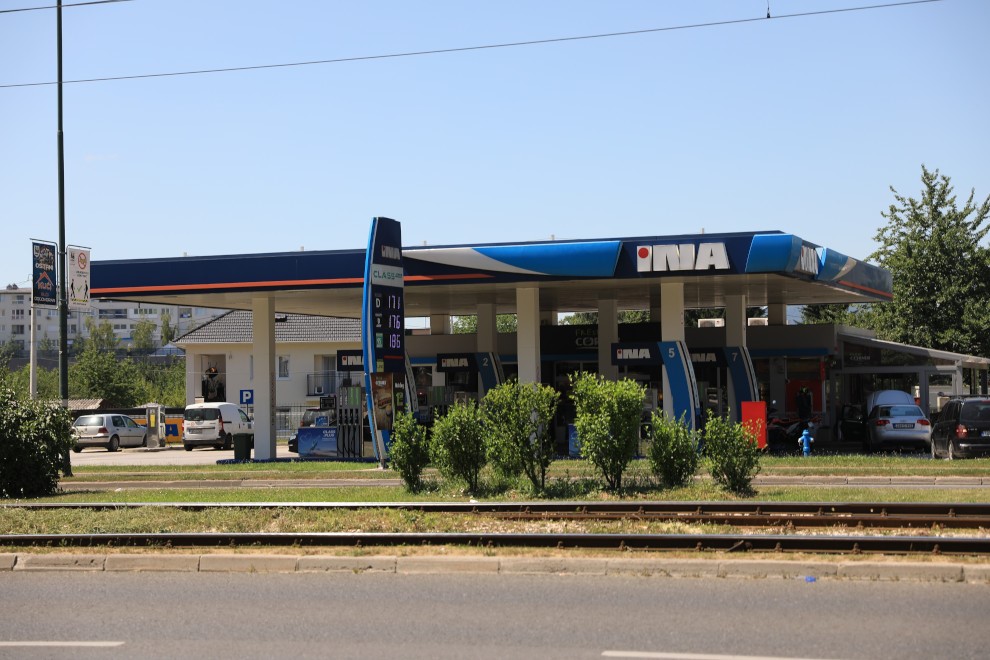 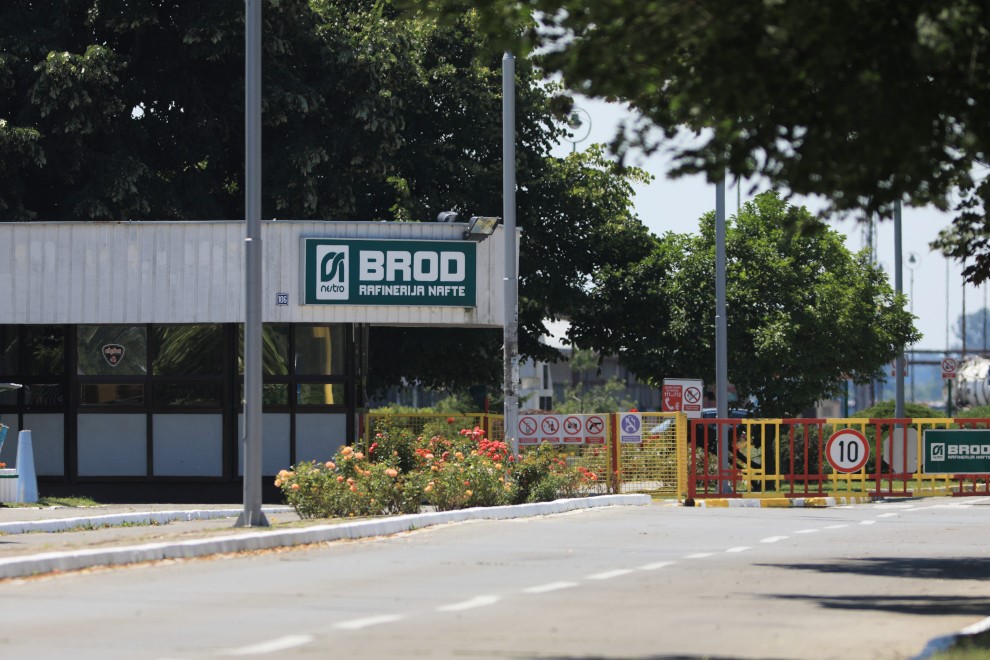 The Oil Refinery Brod was established in 1892 and it is the oldest refinery in Bosnia and Herzegovina. It was established by the Austro-Hungarian company for chemical industry “Danica” with the capacity of 25.000 tons annually. After the World War II, the Oil Refinery Brod was reconstructed and nationalized. A refining production line with the capacity of 2 million tons annually, today called the “vintage refining production line”, was built in Brod Refinery in 1968, and a new refining production line with the capacity of 3 million tons of oil annually was built 22 years later in 1990.
The crude oil is imported to the Oil Refinery Brod through the Adriatic oil pipeline (JANAF) that became operational in 1979 and its main purpose was to supply the Jugoslav refineries with crude oil. The branch of the oil pipeline to the Oil Refinery Brod forks in Slavonski Brod, Croatia. It is 13 kilometers long and is owned by the Optima Group, which, as already mentioned, is 100% owned by the Russian NeftGazinKor. The refinery was severely damaged during the war in Croatia and Bosnia and Herzegovina (1991-1995), so the “vintage line” started operating only in May of 2000 at the reduced capacity, i.e. only 15-20% of the pre-war production. The operation of the “vintage line” at full capacity was renewed in 2008, after it was sold to the Russian NeftGazinKor together with other parts of the RS oil industry, and at the same time started the reconstruction of the “new line”. However, a major accident and a fire in the Refinery Brod happened on the evening of October 9, 2018. One worker lost his life, while ten were injured. The investigation of this explosion is still ongoing, and production at the refinery has not been launched to date.
Immediately after the mentioned accident, information emerged that the production in the refinery was shut down on purpose until its gasification with Russian gas through Croatia is done, and added to this is the fact that a year earlier, on October 31, 2017, a Protocol on cooperation in the implementation of the project “Natural gas supply to the end customer - Oil Refinery Brod” was signed between the RS Government and the Government of Croatia. Also, starting from 2013, there is a yearly significant increase in the imports of refined oil and petroleum products from Serbia, which is the result of the contract on supply of the oil to Optima Group by the Oil Industry of Serbia (NIS), which is majority owned by the Russian Gasprom Neft. 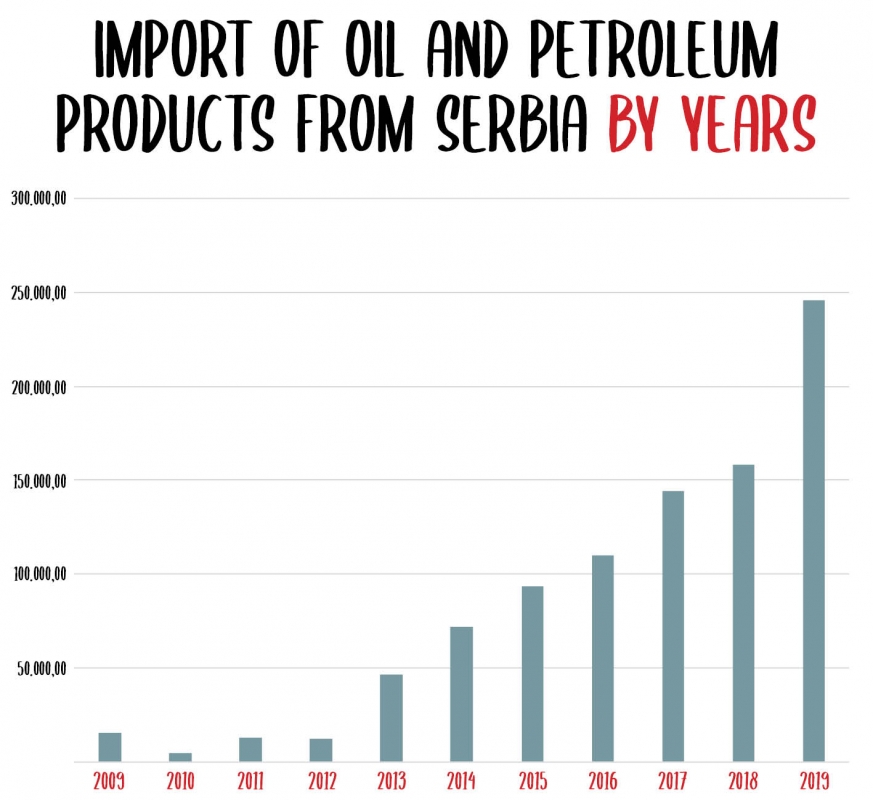 The construction of the gas pipeline from Croatia to the Oil Refinery Brod, about 2 kilometers long, began in December 2019, and Optima Group gave the job to the company “Crodux plin”, which is owned by Croatian General Ivan Čermak. The completion of construction was planned for the third quarter of 2020, however, due to the Coronavirus pandemic, it was extended to December 2020.
While answering the MPs’ questions about gasification at the session of the RS National Assembly, Petar Đokić, Minister of Energy and Mining in the RS Government, had inter alia pointed out that the Optima Group can practically do whatever it wants with the Refinery in Brod because it is owned by them. As he pointed out, the Government of RS can deny the permit for gasification, but that would cause unforeseeable consequences for Republika Srpska, which confirms multiple times presented thesis about the subordinate position of the institutions in relation to the Russian investors. According to the Capital portal, Russian investors are expanding their business to production of electricity by building four solar power plants in the refinery.
Russian monopoly over the distribution network
The largest distributors of oil and petroleum products in BiH are: Nestro Petrol, Hold INA, Energopetrol, Nešković, Petrol Oil, Hifa Petrol, Tioil, Gasprom and Hifa Oil. According to the data presented on their official websites, together they have 414 petrol stations throughout Bosnia and Herzegovina. 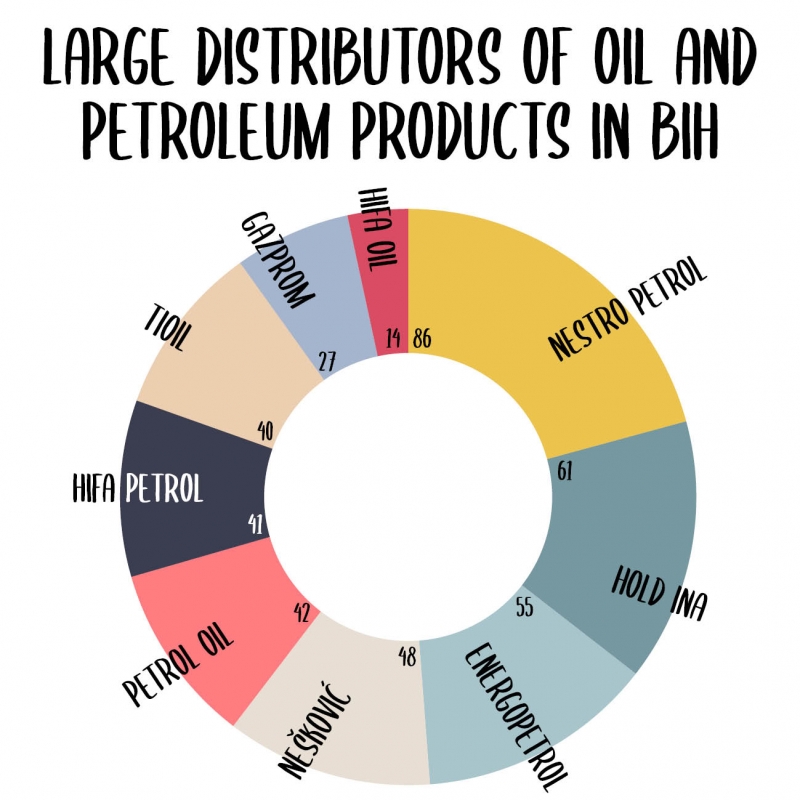 It is clear from all of the foregoing that in addition to imports and refining the Russian companies are directly or indirectly controlling at least 55% of the distribution network of large distributors of oil and petroleum products in BiH.
(zurnal.info)
Pod okupacijom