Looting of the petroleum industry of Bosnia and Herzegovina (2): Secret privatization and operations of the Refineries Brod and Modriča

It all indicates that the plan to destroy, and then to take over the petroleum sector, was created during the war and the first post-war years, and that all political “elites” had agreed to everything for the sake of instant benefit, which is minor in comparison to the value of that business

It all indicates that the plan to destroy, and then to take over the petroleum sector, was created during the war and the first post-war years, and that all political “elites” had agreed to everything for the sake of instant benefit, which is minor in comparison to the value of that business

The authorities of Republika Srpska, led by Radovan Karadžić, had in 1995 registered Refinery Brod as a mortgage on the loan of 60 million dollars to the Liberian Company “Orbal Marketing Service”!? According to the loan agreement, which Žurnal has in its possession, the debt repayment deadline was 45 days. 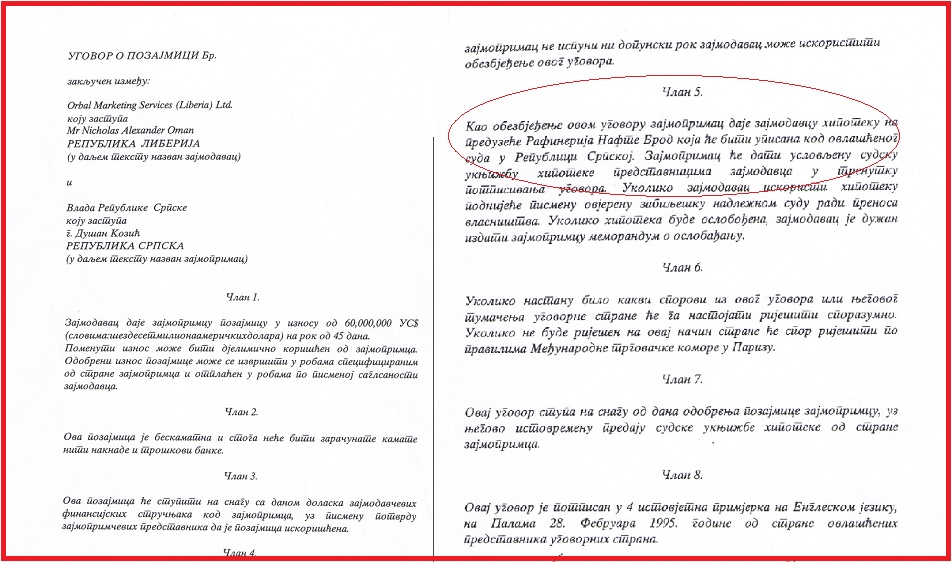 facsimile of the loan agreement

The mortgage was notarized at the court in Sokolac, and was activated in January 2004 when the RS Government was requested to collect the debt!? The owner of “Orbel Marketing Service” was a Slovenian with Australian citizenship, Nicholas Alexander, an arms trafficker and a con artist above all. 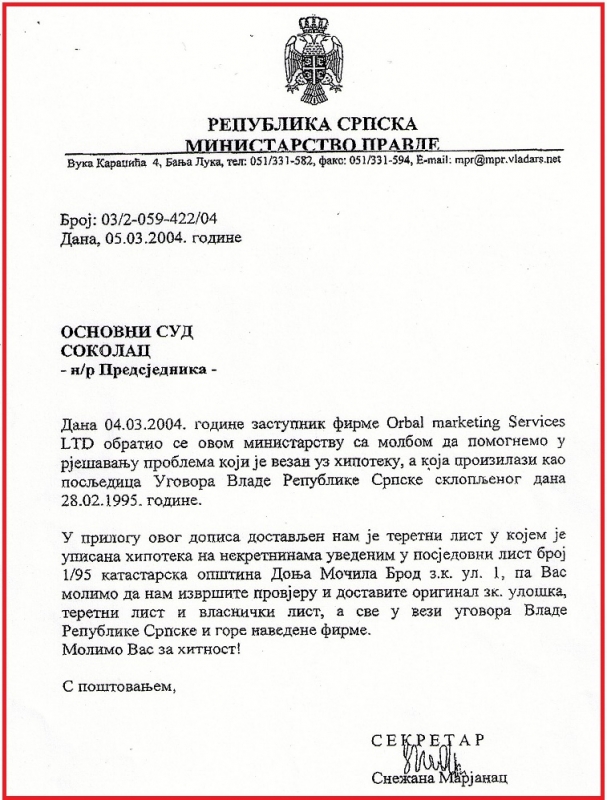 As it was not possible to prove transfer of money or where it “disappeared” then, it can now be said that the interesting side of the story on privatization of Refinery Brod got forgotten. Year 2006 is approaching, coincidentally or not it is the key year for the beginning of the end of such ownership of the state or entities over the petroleum sector in Bosnia and Herzegovina.

There are two refineries in Bosnia and Herzegovina, one for the refinement of oil and petroleum products in Brod, and the Oil Refinery in Modriča. In 2003 Refinery Brod signed a contract with the British Company “Vitol” on exclusive refinement of oil for this company only. 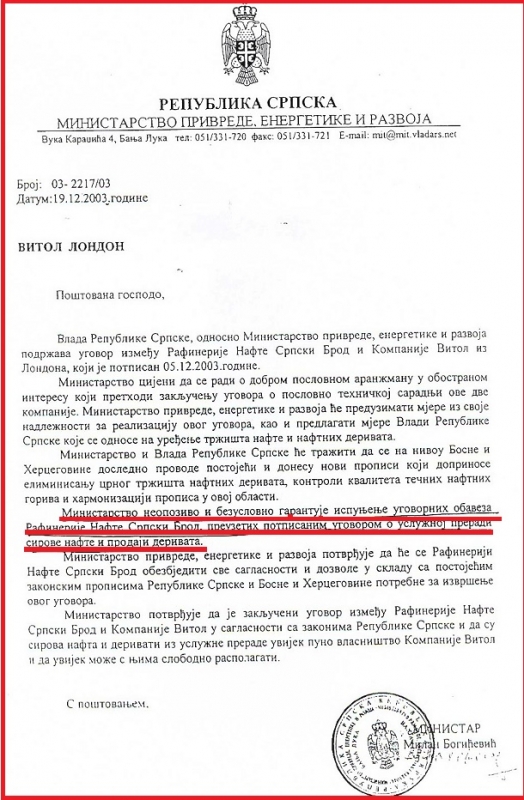 facsimile of Minister Bogicevic's letter - support for the agreement with Vitol

Five months later, the refinery seeks to terminate the contract due to the alleged detrimental effects of the business operations on the refinery. In return, Vitol is seeking indemnity for the profit lost. An agreement on payment of 27.4 million US dollars to Vitol was made in negotiations that took place in secret. The Russians are already waiting at the refinery’s gates.

One of the first moves of Milorad Dodik after regaining power in Republika Srpska in 2006 was to amend the Law on Privatization of State-Owned Capital. The reason of such an action becomes known very soon. A protocol on sale of Republika Srpska petroleum industry was signed. Oil Refineries in Brod and Modriča and distribution company Petrol were sold in February 2007 for 236 million KM to the Russian company NeftGazinKor.

According to available information, 40% of the company NeftGazinKor is owned by the Russian national company Zarubežnjeft, and the remaining 60% is equally shared between three legal entities, one of which is registered in the “offshore zone” in the British Virgin Islands. It is suspected that “persons known to the public” are behind everything.

“Several years now the regime wants to present that the Refinery was bought by the Russian national company “Zarubežnjeft”, which is not true, because the buyer is actually “Neftegazovaja Inovacionaja Korporacija” that is a joint-stock company in which Zarubežnjeft only has an ownership share, and other co-owners are unknow legal and natural persons. It has long been speculated who the owners of “Neftgazinkor” are, apart from Zarubežnjeft, and there are even those who say that these owners are also the regime champions from RS,” pointed out the former RS President Dragan Čavić at the time when he was the opposition to Dodik and SNSD. 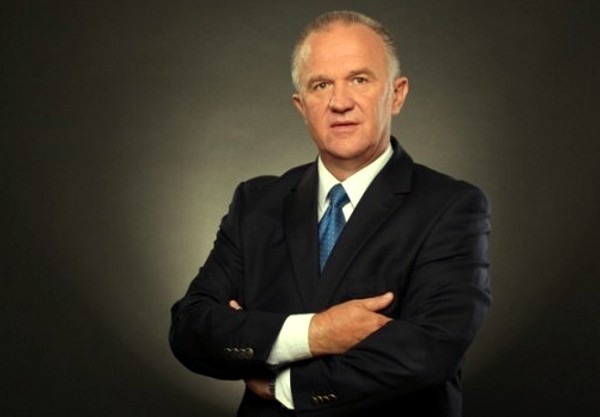 NeftGazinKor established company Optima Group in 2008 in Banja Luka, all for the purpose of controlling the entry and the exit of crude oil and goods. Majority of the contractual obligations have not been observed, while the losses are increasing. The total debt of two refineries and Nestro Petrol exceed 800 million KM. 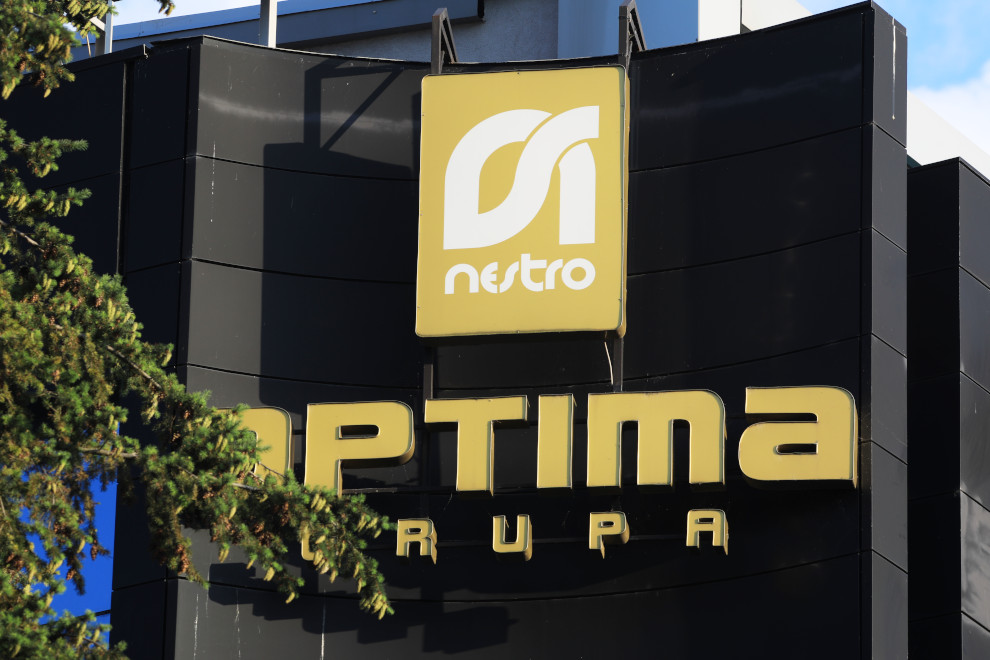 However, the Russian partners do not seem concerned, neither does Milorad Dodik, who since then has become a frequent visitor of Moscow, where he obviously has more profitable moments than waiting on a photo with Vladimir Putin.

Of course, if one is to believe the information that the Russian (co)owners are presenting. The official information of the Indirect Taxation Authority (ITA) reveals that approximately 9 million 600 thousand tons of crude oil (tariff number 2709) and 9 million 450 thousand tons of refined oil and petroleum products (tariff number 2710) were imported to BiH in the period 2009-2019. When it comes to the import of crude oil, the data reveal that 98% is imported from Russia, while only 2% falls on other countries. 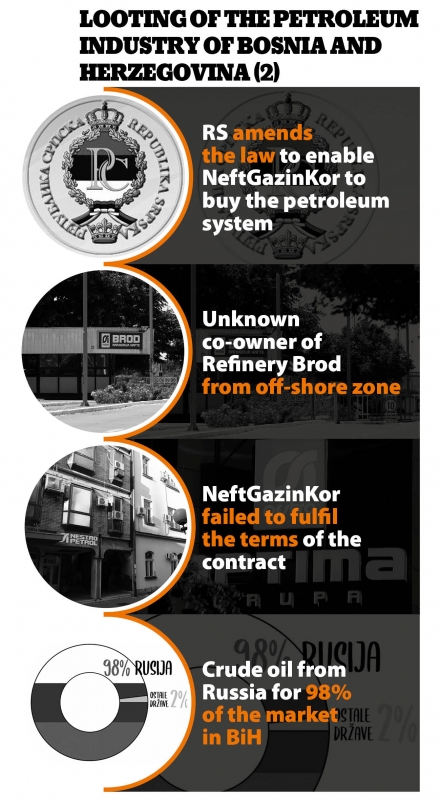 In any case, the commercial effect of Russian partners’ influence in relation to the political one still takes a backseat. The work has been done only on one side of the entity border. They were waiting to see the one in the other entity completed, and it’s the takeover of Enegropetrol, which started at the same time, in 2006. (to be continued)

Refinery Brod, Orbal Marketing Service, Looting of the petroleum industry of Bosnia and He