DAVOR DRAGIČEVIĆ FOR ŽURNAL: Police junta and so-called opposition are covering up murder

David Dragičević disappeared on March 18, 2018. His family and friends had come together and searched for him for days. More and more Banja Luka citizens wondered what happened to the 21-year-old young man, who, like many times before, went out on the town.

Six days later, on March 24th his mutilated body was found at the mouth of Crkvena into Vrbas River. It was clear that he had been tortured and brutally killed!

“At the press conference, held today in Banja Luka, it was said that the police determined that on the fateful night David Dragičević from Banja Luka, whose body was found in Vrbas, had fought three people, robbed a house and jumped from the bridge into the river”, reported the Government’s News Agency SRNA on the same day.

At the shameful press conference, led by the then director of Republika Srpska Police Darko Ćulum, the then head of the Administration for Organized and Serious Crime of the Ministry of Interior of Republika Srpska Darko Ilić and corner Željko Karan, David was characterized as a drug addict and a very troublesome young man, prone to physical confrontations and petty crime. All this was supposed to justify the thesis of “accidental death”, and to immediately close the case.

His father Davor Dragičević and mother Suzana Radanović, as well as many friends and fellow citizens did not believe in this police version. The father sent a message from Krajina Square:

“The child was murdered!”

Only one question – who killed David - was raised at the daily protests of hundreds of citizens. The evidence in the sloppy investigation begun to disappear as the informal group “Justice for David” grew, bringing together an increasing number of primarily parents. While the competent prosecutor’s offices kept silent, the public was learning about the details of the cover-up and omissions of the then chief prosecutor of the Banja Luka District Public Prosecutor’s Office, Želimir Lepir, and the acting prosecutor in this case, Dalibor Vrećo.

Bringing the end to any story about David suited the Minister of Interior, Dragan Lukač, who at one moment, according to Lepir’s public confession, had ordered the case to be immediately closed. Milorad Dodik, the ruler of life and death in Republika Srpska, also got involved in the case. He was not trying to help; he rather took the liberty to shamelessly insult the parents of murdered David.

The regime media was silent about the death of the young man, Krajina Square was swarming with dissatisfied Banja Luka citizens, and the police began to “discipline” them. The opposition unashamedly used the family’s tragedy for self-promotion and pandering to the disgruntled citizens. 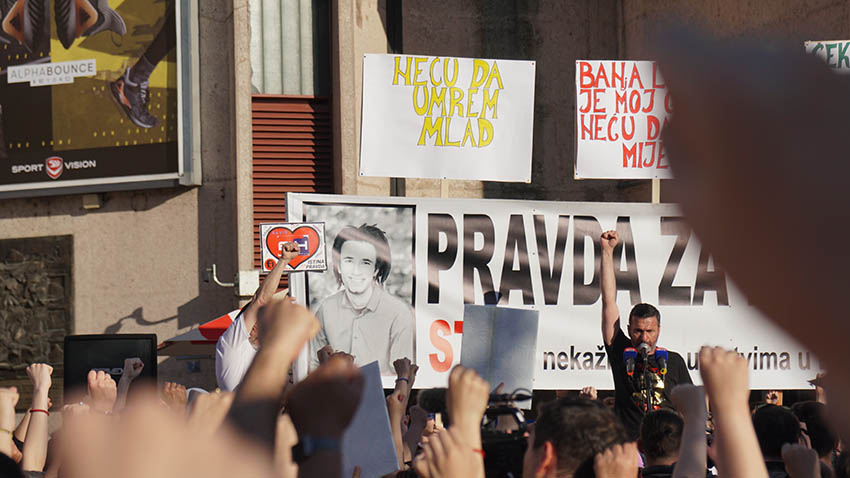 The most brutal police suppression of the protest took place between December 25 and December 30, 2018. Father Davor and mother Suzana were also detained in addition to dozens of protesters. The truncheons blazed, and there was blood in the Square. The house of Dragičević family was also searched. David’s father was accused of attempted coup, but he managed to escape the enraged police that had been looking for him for days.

“The boy, whose murder shook the whole country, the region and even the world, had to leave his last resting place quietly, almost secretly. That is what the regime wanted, that is what those who killed him wanted. He is gone forever, and we are the only ones remaining here. And David’s killers”, wrote Žurnal on March 14, 2019.

On that day, exhausted from the pain, the most audaciously humiliated and persecuted Dragičević family had transferred David’s body to Wiener Neustadt, Austria. Father Davor waited for the coffin right there, where he buried his own child for the second time. David left Banja Luka ghetto, leaving the fight for justice to his fellow citizens.

The protests have not been suppressed to date. The group “Justice for David” is asking the same question on the plateau near theTemple of Christ the Savior every night.

Thousand days have passed since David’s parents and the group “Justice for David” started searching for the truth about the brutal murder. His father, tormented by injustice, agreed to speak for Žurnal. 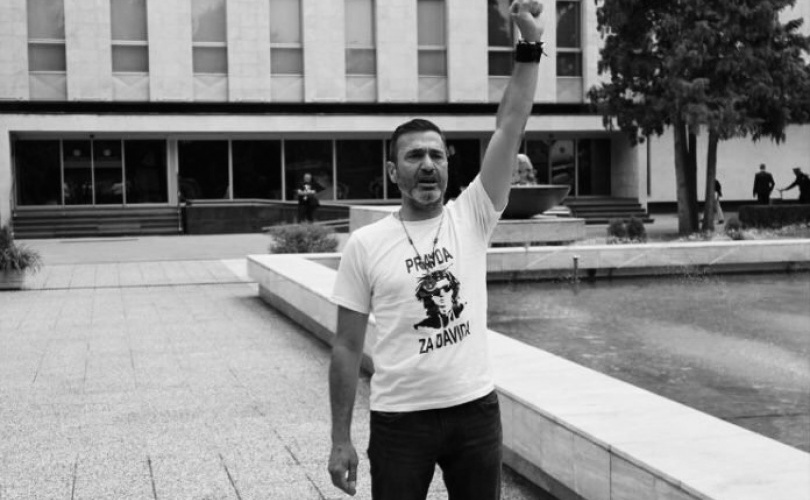 DAVOR DRAGIČEVIĆ: Even after 1.000 days, as on the first day, David Dragičević was killed by the Ministry of Interior of Republika Srpska, headed by Dragan Lukač.

ŽURNAL: Will the perpetrators ever be brought to justice?

DAVOR DRAGIČEVIĆ: The perpetrators of the organized murder of David Dragičević will certainly be brought to justice.

DAVOR DRAGIČEVIĆ: When the court proceedings for the murder of David Dragičević starts.

ŽURNAL: David’s tragic death and the search for the truth and justice united people in Banja Luka, and even in the whole Bosnia and Herzegovina, more than anything else. At one point there was more than 30.000 people in Krajina Square, searching for the truth about the murder. Today it is only rarely mentioned, and the perpetrators have not been prosecuted. Why did all this, in a way, shut down?

DAVOR DRAGIČEVIĆ: Our fight for the truth about the murder of David Dragičević will not end until all those who committed this horrible crime are prosecuted in accordance with the law. 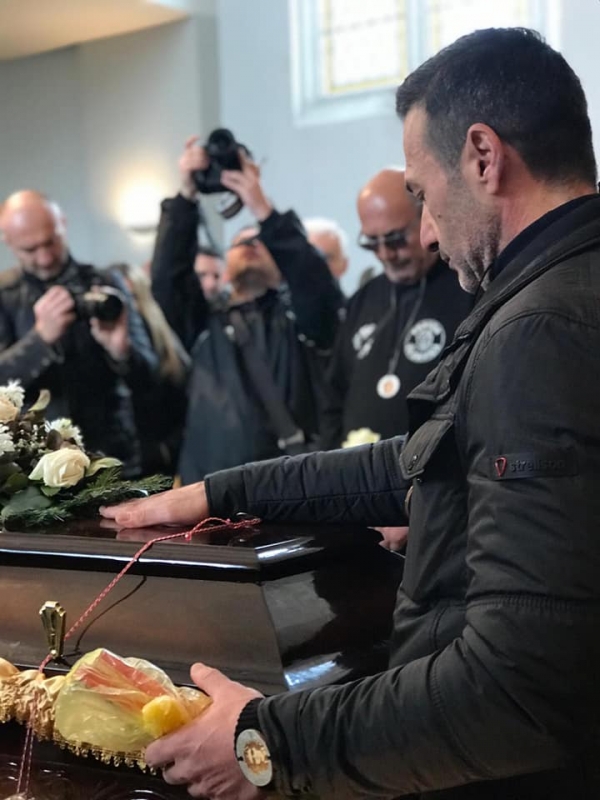 ŽURNAL: Could the pressure on the institutions have been greater and why wasn’t it the case?

ŽURNAL: Over these thousands days you have been almost constantly saying that you have evidence about the perpetrators. When you will go public with the evidence?

ŽURNAL: Are new protests of 30.000 or more citizens, who again demand the truth and prosecution of the perpetrators, possible in the squares of Bosnia and Herzegovina?

DAVOR DRAGIČEVIĆ: They are not planned at the moment. People in Banja Luka are still in the streets every day, 1.000 days, asking the same questions as on the first day – who killed David.

ŽURNAL: The general elections came after the protests and the regime’s ban on gathering of citizens and one could feel that the government was shaken. A new mayor was elected in the last local elections. It is hard to shake off the impression that the political changes in Banja Luka started with the protest “Justice for David” and everything that happened after that. At the same time, the political party “Justice Movement” did not pass the electoral census. How do you interpret that?

DAVOR DRAGIČEVIĆ: The changes started with the protest “Justice for David”. That is the general impression. However, soon after the election, most of them showed the reasons why they were there. We are still here seeking justice that we have not received. The number of votes that the “Justice Movement” received in the local elections is not negligible at all, and it obliges us to firmly remain on that path. We are aware of the fact that our society finds it difficult to accept changes, but we will not give up.

ŽURNAL: Did politics use the tragedy of the Dragičević family?

DAVOR DRAGIČEVIĆ: Politics has led to all this, so the tragedy of the Dragičević family only reflects the state of our society. Some politicians have used this tragedy to promote their goals, but that speaks more about them than about us.

ŽURNAL: Who benefited the most?

DAVOR DRAGIČEVIĆ: The so-called opposition, which achieved its set goals, without sincere support to having the murder of David Dragičević finally solved.

ŽURNAL: The regime continues to persecute you for fighting to find out the truth about who killed your son and to have the perpetrators brought to justice.  Accusations, that are beyond common sense, have been used to satanize you. Besides the tragedy you had experienced, what is it like to be Davor Dragičević?

DAVOR DRAGIČEVIĆ: The regime is not only persecuting me, it is also persecuting all other people who support me, and they prove it on a daily basis with their fabricated indictments that so far the court has dropped. It is important to note that no one in Republika Srpska wants to reveal the truth, since everyone is aware that the crime was committed by Republika Srpska Ministry of the Interior and the prosecutor’s office. But all will have to face the truth one day. And, of course, this case will have unforeseeable consequences for those institutions.

ŽURNAL: If you could, would you change anything in your fight for truth and justice?

DAVOR DRAGIČEVIĆ: I would not change a thing. I stood up for my child from the first day and I will never stop fighting. 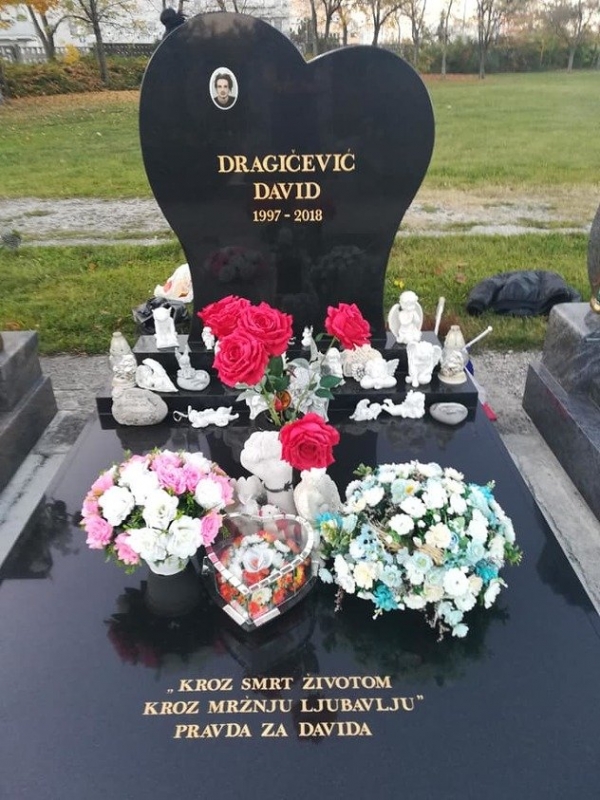 ŽURNAL: Do you trust anyone?

DAVOR DRAGIČEVIĆ: I trust in justice, my lawyer and the people around me and it will stay that way.

ŽURNAL: What are you doing in Austria today?

DAVOR DRAGIČEVIĆ: I have continued my fight Austria through the association we founded here. My mission and promise to my child is the ultimate fight to get the justice.

ŽURNAL: What would happen if you came back to Banja Luka, would you be safe? Are you scared?

DAVOR DRAGIČEVIĆ: Coming back to Banja Luka is currently not possible because there are fabricated lawsuits against me. All those I have identified as my child’s killers have been promoted. Dragan Lukač’s junta is continuing to illegally follow people who support me. It is an entity ruled by a police junta led by Lukač. If I came back now, I would end up like my child. My safe return would be possible only if all those involved in the crime are prosecuted. Nobody from the institutions is interested in that and no one has stood up for that so far, particularly not the individuals from the so-called opposition. They, all together, stood in defense of the vital national interest, which is to cover up the murder of David Dragičević.

ŽURNAL: After everything you have been through and experienced from the regime, what would you say to the parents who plan to have and raise children in Bosnia and Herzegovina?

DAVOR DRAGIČEVIĆ: To do everything in their power to put their children on the right path, to give them all the love and support on that path. We need to live together and to fight for a better tomorrow for our children and for all of us. We can achieve this only if united, relying on each other, regardless of religion and nation. The most important thing is to be a decent human, to have dignity and freedom, not being a slave to prejudices. Bosnia and Hercegovina is a country of all of us who want a normal society and to finally say NO to the individuals who brought us into this situation. LET THERE BE JUSTICE FOR DAVID AND DŽENAN, LET THERE BE JUSTICE FOR ALL!