THE SITUATION IN THE FIRM FROM BUGOJNO IS GETTING ALL THE MORE DIFFICULT: Binas workers have not received seven salaries, they are asking for their booklets to be certified

The trade union claims that they have been on paid leave for the third week, because they do not have any new concluded contracts, nor the material needed for work. Bakir Morić says that most workers cannot even come to work, because they do not have enough to pay for transportation. The current acting director of "Binas", Abaz Mandžuka, claims that production will start soon. The President of the Supervisory Board, Mehrid Omerinović, mentions problems with market disruption.

The situation in the Bugojno weapons factory "Binas" is getting worse: workers are owed seven salaries, and five hot meals, and their contributions have not been paid for the last 10 years. The trade union warns that they have been on "paid leave" for three weeks now because they do not have the materials needed for work, or new job contracts.

Bakir Morić, president of the trade union branch "Binas", claims that last year alone they operated 6.2 million euros in deficit: "And no one is to blame for that, nor will anyone be responsible." The company is, by the way, in a deficit of over 20 million in total."

How do we live without pay? Well, we scrape it together somehow…

Binas workers received only two salaries this year, the last on February 14th for November 2021, while their salaries for August, September and October last year remained unpaid.

"How do we live without wages? Well, we scrape it together somehow. My wife also works in my family, so we stretch out the pay ... It's hard. Some of the workers of "Binas" travel five kilometres, but as they owe us seven salaries, they are in a situation where they cannot come to work every day. Now there are already more than half of those who do not have enough to pay for transportation or fuel. Some workers even have their private accounts blocked", Morić said.

The union sees the President of the Supervisory Board, Mehrid Omerinović, for whom this is the fifth term, but also the current acting director Abaz Mandžuka and his predecessors Enes Memić and Sabahudin Ganić, as the biggest culprits.

"With the arrival of the current director, we are already two million in deficit. The only income he had was from the sale of old machines, but the workers did not receive anything from that sale", they say from the Trade Union.

Behrem Bushatlic, vice president of the union, believes that the situation today is much worse than it was last year: "This director has taken the same path as his predecessor. The very fact that we don't have seven salaries says it all. We also have problems with health insurance, we ask that our health booklets be certified".

He added that in addition to the above, in the last two years they have been facing the departure of workers and engineers. "During the term of the current director, over 40 workers resigned, and during Memić's time, over 80 workers resigned."

Our interlocutors say that "Binas" has not signed a significant contract since August 2017. According to them, they operated positively only in the period from 2013 to 2017, when Adem Huskić was the head of the company.

“Even back then there was the same team of politicians, but "Binas" worked. Huskić signed new contracts, we worked for Turkey, Spain ... He was fired due to a conflict of interest, because his son opened a similar company nearby”, says Morić.

For Ganić, who replaced Huskić, they say that in two and a half years he visited about 15 fairs in 15 countries, but that he never sold anything. He claims that Memić took the company into the greatest deficit: "He replaced four secretaries, but he never concluded any new contract." Let us remind you that Memić resigned after last year's strike.

Let us also mention that each of these directors performed that function as an acting director, while the competition for the director of "Binas" was never announced.

Abaz Mandžuka was appointed acting director in December last year, and the union claims that he only deepened the problems: "He is the only director who brought his driver from Novi Travnik, gave him a contract and a salary of 1,200 KM".

Morić claims that these are their two workers' salaries: "He only signed that contract. We don't have seven salaries, we have engineers and educated workers leaving, and he brings a driver and gives him that salary".

But Mandžuka claims that this "is not the only contract he signed".

"I still have signed contracts, but it's a trade secret. We have so many contracts that we can work for the next two years ", says Mandžuka. When asked why he doesn't work then, he states that "they are not liquid": "Liquidity killed us. We need initial funds to start and work. We can't get loans because we are in the consolidation phase". He reminds us that he was appointed acting director in December last year, so that even if he wanted to, "he can't get some things out", because, as he says, "you need to be very skilled": "Emerick Blum couldn't help them in five months".

Mandžuka also mentions the problem of market disruption, noting that he has been in this business for a very long time, but that he has never had an offer from a supplier to ask him for a 100 per cent advance, and that the offer is only valid for 24 hours: "We cannot procure aluminium, because the procurement deadline was two months ago, and now it is seven. And once a kilogram of aluminium cost seven KM, and today it is 15 KM. These are all some of the difficulties".

He also found justification for his predecessor Enes Memić, who he says entered an awkward phase when there was a Covid pandemic which made it difficult to do business. However, Mandžuka states that everything can be solved, that production will start soon and that solutions will be found in order for the workers to receive their salaries.

The first reaction of the President of the Supervisory Board, Mehrid Omerinović, to the accusations from the Trade Union that he is one of the main culprits for the bad situation in "Binas" was that "he does not know what to say about all that". He then emphasized that "Binas" has a perspective and signed contracts, but since it is a business secret, he could not say anything more about it.

"We have really good numbers. There were also contracts on August 1 when the strikes began, but disobedience ensued. We demanded that the workers work and that the supervisory board, the management and the union meet every Friday, but they did not want that. Back then it was about three missing salaries and a solution could be found. However, shifts of people have started, and every shift requires time, which was recently confirmed by Minister Džindić", said Omerinović. He also mentioned the current problems with the market and the procurement of special materials.

Let us remind you that last year as well the workers demanded the removal of Omerinović. Even today, the representatives of the Trade Union see the only solution in his dismissal, but also in the dismissal of the current director.

It was said for Žurnal that there are indications that the workers of "Binas" plan to gather in front of the gate on April 14, when it will also be two months from the last salary they received. They allegedly plan to ban the director Mandžuka from entering the company. We also find out that the company "Pretis", about whose business we published a series of articles, has significantly reduced its debt of three million KM to "Binas" since August last year. 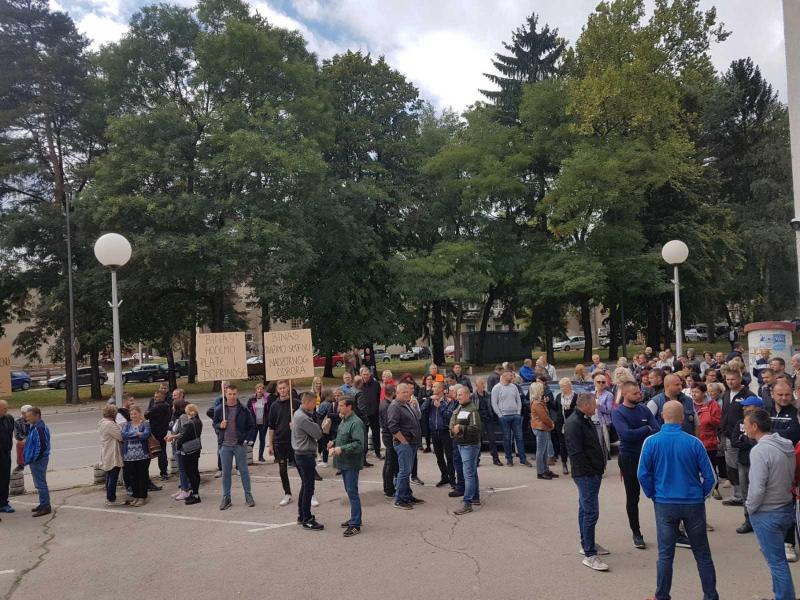