Instead of the one who would be inscribed in political history as the implementer of its independence, Dodik could be remembered as the one who sold (out) Republika Srpska through credit indebtedness. Are the natural resources of this entity a pledge to repay the loan?

It is no coincidence that in the series of jurisdictions of Bosnia and Herzegovina and the law passed by the OHR, and then confirmed by the state parliament, the most painful item for Milorad Dodik is the ban on disposing of state property.

In the last ten years, the Constitutional Court of BiH, with three decisions, has prevented the Republika Srpska from registering military property, then agricultural land, and finally forest property in the ownership of this entity. It can be interpreted that by registering the mentioned state property "in the ground" of the entity, a kind of legal relief would be created in the efforts for the succession of Republika Srpska. These decisions, not only make it impossible for the RS to dispose of or sell state property and resources, such as the hydroelectric power plant on Drina or the Trebinje airport, without the consent of the state parliament. There is something else that can realistically be the reason for Dodik's growing nervousness and unwise policy. It is quite possible, and all for the sake of complete non-transparency of the entity authorities, that natural resources, water, forests are given as collateral, that is, a guarantor for repayment of strong loans and debts that are realized every now and then to maintain the financial stability of this entity.

At the end of April this year, Republika Srpska sold bonds worth 300 million euros through the London Stock Exchange. It is known that this is a short period of five years and high-interest rates of 4.75%. The sale was made through a direct agreement with an unknown buyer, but there are no more details, especially about the guarantees in case the RS is not able to pay the bonds due to the bad financial situation. And those 300 million euros bring with them the payment of more than 70 million euros of interest!!

"We have been ignoring one fact for a long time. What happens if the RS does not return that first instalment? Who will return it? There are two scenarios. The first is to legally and formally block the accounts of BiH as a country. The second is to start confiscating property on the territory of BiH”, SDP Vice President Vojin Mijatović was among the first to express doubts about the use of natural and other resources as collateral.

Unlike other debts, this does not have a guarantee from the state of Bosnia and Herzegovina, so it is quite realistic to suspect that Dodik offered as collateral what the entity did not own by the decisions of the Constitutional court, military property, agricultural land, forests, and rivers. This may be the main reason to go for all or nothing and under the guise of fighting for the return of entity competencies. Ultimately, he admitted that part of the new debts was intended to repay other overdue debts.

In the last ten years, the Constitutional Court of BiH, with three decisions, has prevented the Republika Srpska from registering military property, then agricultural land, and finally forest property in the ownership of this entity.

At the same time, the mentioned issue of bonds exceeded the legal framework of possible indebtedness of  Republika Srpska of 500 million, so last month that limit was raised to 750 million. Immediately afterwards, it was announced that by the end of the year, the electric power industry of Republika Srpska will issue bonds on the Vienna Stock Exchange in the amount of 140 million. This is more proof that there is no money in the entity budget because the sale of shares is scheduled to provide the contracted 15 percent of funds for the construction of the Bistrica and Dabar hydropower plants with two Chinese companies.

It should be recalled that three years ago, Republika Srpska issued shares worth 200 million euros through the Vienna Stock Exchange, and 168 million were sold. The details of this transaction are an "entity secret", from the names of the buyers or buyer, including some Russian tycoons such as Konstantin Malofeev, to what exactly is the collateral for the show. 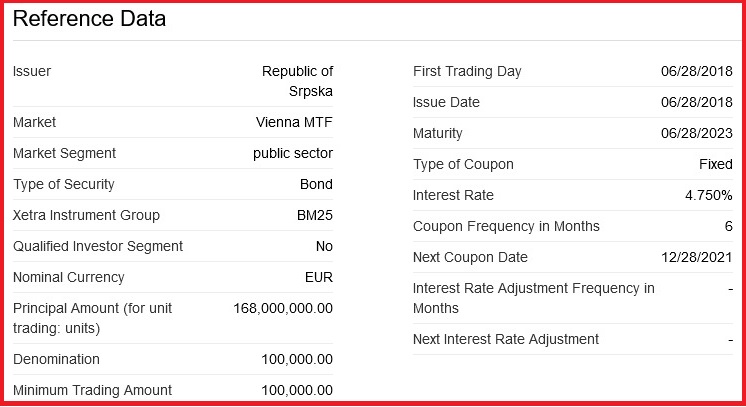 "This agreement from Vienna states that if the RS does not return the funds to creditors, the bondholders have the right to seize any company that is more than 51% owned by the RS. These are very strict conditions, so if the entire amount is not returned in 2023, someone might come and take, for example, a part of the electric power industry of the RS", economist Zoran Pavlović warned for RSE.

Yes, 2023 is near and then Republika Srpska will need to return more than a billion marks of liabilities, after 650 million this year and about 850 million next year. That is why it is possible to believe the allegations from unofficial sources that Milorad Dodik used the recent visit of the Prime Minister of Hungary, Viktor Orban, to ask for help in order to borrow one billion on the Vienna Stock Exchange next year!?

The fact that for Dodik the most important thing is to fight for the ownership of the entity over forests and agricultural land is also shown by the fact that after the recent meeting with the President of Serbia, Aleksandar Vučić, in Belgrade, that issue was expressed as primary in relation to all others.

SALE OF REPUBLIKA SRPSKADodik pawned natural resources for a billion marks of credit?

"What is very important for me is that he is ready to talk if that (forest ownership) problem is solved. That, it seems to me, deprives all those who want to say that Dodik or the RS is guilty, and introduces us to something that is a rational and pragmatic approach", Vučić said after the meeting, announcing what could calm Dodik's dangerous political adventurism which he propagated more intensely in the past few months than ever before.

That is why Dodik presents every new loan indebtedness as good news because it prolongs his power, while at the same time he is ready to lead the entity in the process of abolishing the jurisdiction of the state of Bosnia and Herzegovina, that is, informal secession. He goes for all or nothing.

Ultimately, instead of the one who would be inscribed in political history as the implementer of its independence, Dodik could be remembered as the one who sold (out) Republika Srpska through credit indebtedness.

"INVESTORS": Who enabled the Chinese to take over natural resources in Herzegovina?

WHAT IS HIDDEN BEHIND THE JOB WORHT 200 MILLION: Chinese company from the black list won the construction of the tunnel through Trebević