Four months of 2022 were enough for the Government from the third age to provide "Prointer", whose services cannot be refused, with 1,805,468 KM. With this, the sum from the contract for the jubilee of five years for "successful cooperation" reached - 21,423,916 KM!

This year, the Government of Republika Srpska was most actively involved in the hysterical distribution of public money to save “Prointer”, a company that on tenders ravages public cach registers and is connected to the family of Bosnia and Herzegovina Presidency member Milorad Dodik. Prime Minister Radovan Višković unties the bag for digital innovations every time he receives one, real, verified, most qualified and offer with certificates that IT experts from the executive branch have drawn up. Four months were enough for the Government from the third age to provide "Prointer", whose services cannot be refused, with 1,805,468 KM.

With this, the sum from the contract for the jubilee of five years for "successful cooperation" reached - 21,423,916 KM!

Since January 5, the black list of the United States of America for Milorad Dodik has become even blacker, "Prointer" was waiting for the first such steps of the world's IT companies, but Viskovic did not hesitate. After only 22 days, a contract worth, interestingly, 999,999 KM  including VAT, was made. The one-year task will be to maintain the government's data centre and information system infrastructure. There were no complaints in the tender, because everything was clear from the beginning - only the "best" sent a bid worth just as much as the estimated value of the public procurement.

In eight years, the value of this job alone, according to the needs of "Prointer", has increased more than 3.5 times. From 2014 to 2017, the data centre and infrastructure of the Government's information system were maintained by "Lanaco" by Nebojsa Ninić, one of the founders of the SNSD. Based on three contracts, it cost the citizens 279,396, 290,628 and 290,628 KM.

The new million-dollar deal is not the only one, another expensive contract arrived on February 22. “Prointer” shared it with the company “Hit Ing”. Procurement and installation of air conditioning systems in government data centres cost 499,590 KM. Ten days later,  "Prointer" and "M: tel" received a contract worth 51,755 KM for renting and maintaining internet links.

The Service for Joint Affairs of the Government of Republika Srpska (whose secrets, especially those related to the users of apartments in the building of the executive power, are hidden by the acting director Ranko Tomašević) is receiving offers from the company, which no one can refuse. Maintenance of the telephone system and contact centre in the administrative centre, as well as the business facility of the Government, according to the contract from April 12, will be paid 245,624 KM.

YEARS OF LOVE, UNDERSTANDING AND COOPERATION - YEARS OF IT DESTRUCTION

While the citizens of RS are "missing a document" for everything, the regime does not stop flaunting IT tenders that fill “Prointer's” cash registers from year to year. The Government of Republika Srpska gave 22 contracts worth 7,891,958 KM to the company in five years, during which time the Service for Joint Affairs of the Government did not stand still - 12 contracts worth 13,531,958 KM.

The ice was broken in 2017 with the purchase of computer equipment for 140,379 KM. Among the more expensive contracts from 2019 was the maintenance of a single information system for the registration of business entities for 699,613 KM.

For the "Microsoft Premier Support - high-level support for Microsoft products", a job that can no longer be done due to the termination of the "Prointer" partnership, two years ago the Government paid 389,610 KM. For the same year, 499,368 KM were given for Microsoft licenses for judicial bodies and public universities in RS.

The fist and hat of the Service filled the pockets of a suitable company far better. The contracts mostly severely exceeded the figure of half a million, but one of them, Žurnal wrote, provided 9.4 million KM.

The job of "Prointer" and "Lanac" in 2018 was nothing but stretching cables for the Internet and expanding its capacity in the administrative centre in Banja Luka.

'PROINTER ITSS d.o.o. Banja Luka', the authorized representative of the group of bidders (Bidder group: PROINTER ITSS d.o.o. Banja Luka and Lanaco d.o.o. Banja Luka), submitted the original and a copy of the bid. The bid meets all the conditions and requirements of the tender documentation, that is, the bid is acceptable and may be subject to further evaluation in accordance with the criteria set in the tender documentation ", reads, among other things, the decision on the selection of the most favourable bidder signed by the then director of Service, Goran Maričić, who was later promoted to director of the RS Tax Administration. 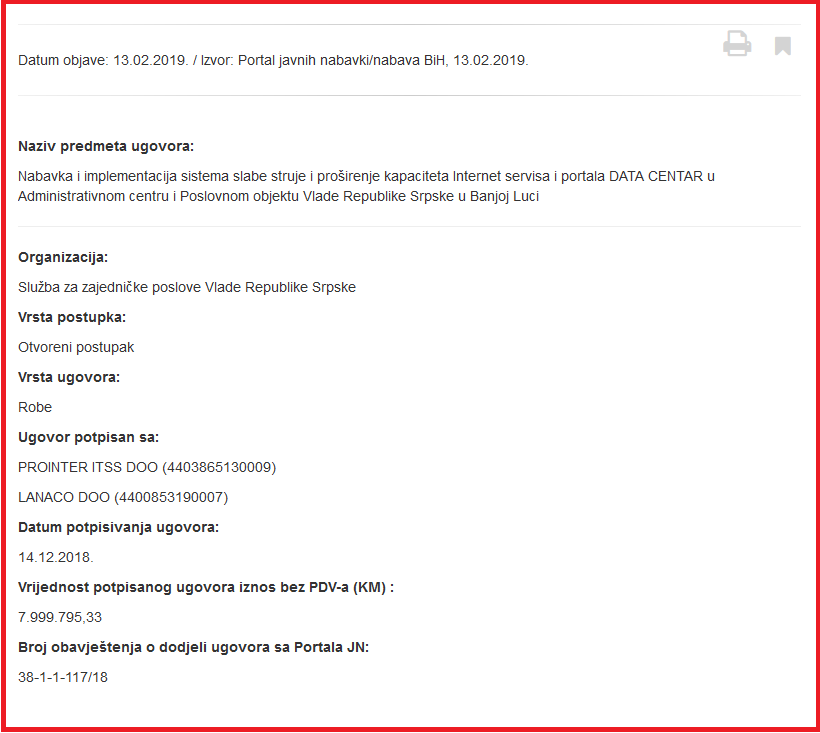 The million-dollar deal came half a year after the government paid a fabulous six million KM to the company "Lanaco" for the Microsoft licenses.

Large sums are intended for big players, which was very visible in that tender as well. The tender documentation stated that the bidder must have at least one contract worth 1.9 million KM without value-added tax related to the procurement of active network equipment and another identical value that had servers and storage for the subject of procurement. The government also asked for such companies to have a minimum of 18 members of the technical team.

In the non-governmental sector that monitored public procurement, favouritism and inflated prices were pointed out. However, the judiciary in RS and BiH has never reacted to overt tender frauds.