The companies Green Life and Best invest were registered last year, and according to FIA data, they have no income and no employees, but despite this, they appear as real estate investors in Bjelašnica. Some of the other investors are Butmir, Mia Lamia, Gradur TGI, Ideja, Brend, Oki, Panorama sole, Govza... Sebija Izetbegović, Asim Sarajlić, Alija Budnjo, Amela Čampara, Jusuf Zahiragić, Emir Talirević, Amar Arslanagić, and several other names and defendants from the Pravda i Zadruga (Justice and Cooperative) case are listed as the owners of the apartments.

Author: Zinaida Đelilović Objavljeno: 25. prosinac 2022. 16:10
Who is responsible for the wild construction on Bjelašnica? (Adi Kebo/zurnal.info)

"The long-term systematic destruction of Bjelašnica is an indication that there is no law for Ibra Beril. He thinks that he is the law and that no one can do anything to him", said those we talked to about the illegal construction on Bjelašnica, the illegal clearing of high-quality forest and endangering drinking water. We have already written that an assessment of the impact (construction) on the environment has never been made and that the Municipality of Trnovo does not have an environmental permit. This is precisely why they could not get permission from the KS Ministry of Economy to change the use of forest land to construction land for 20 plots within the business and sports centre of Trnovo on Bjelašnica.

This did not prevent the Municipality of Trnovo from selling plots to private investors and issuing them building permits. Competent institutions are aware of this. Each of them says that they have done their part of the job, which implies that they sent a request to another competent institution or possibly made an official note... In other words, the responsibility is transferred from one to the other, while Berilo and private investors continue with the construction.

"Just look at who the investors are, but also who the owners of individual apartments are and everything will be clear", some of the interlocutors will instruct us, who, for reasons known to them, do not want to speak openly to the media.

The companies that appear as investors in the business and sports centre of Trnovo are Green Life, Butmir, Mia Lamia, and on their plots, the cantonal inspection discovered illegal forest clearing, which is why requests were made against them to initiate misdemeanour proceedings at the Municipal Court in Sarajevo. Despite this, apartments have since been built on these plots, which Žurnal has already written about.

According to the Financial Information Agency (FIA), the owner of the company Green Life was registered at the beginning of 2021 and is headquartered in Babin dol on Bjelašnica. In the last year, they had no employees, nor did they have business income, but they are recording losses. 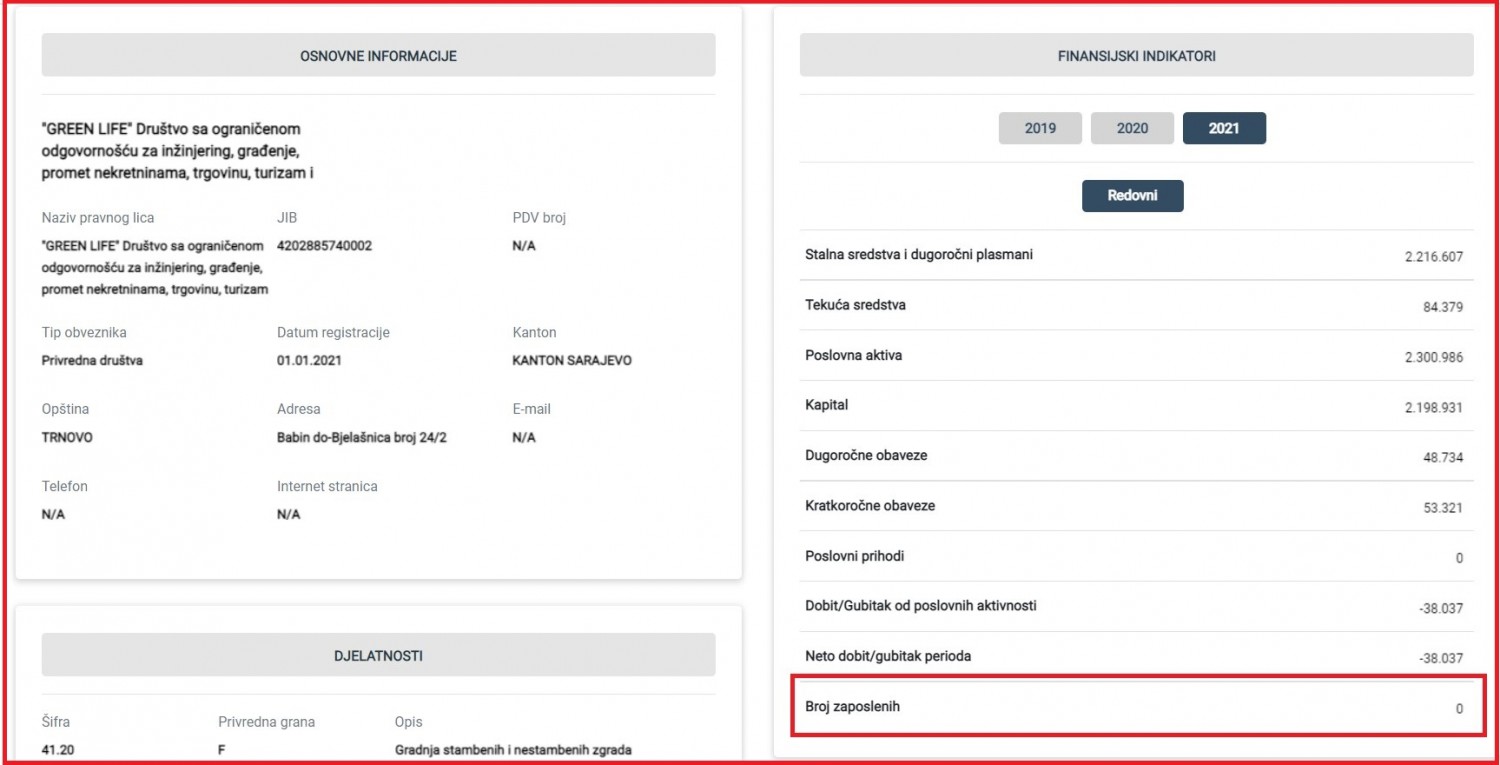 According to information from Akta.ba, the responsible person is Mirsad Šiljak, former director of FK Željezničar, while the name of Erollda Belegu is mentioned in the ownership structure.

The owner of the plot within this centre is the company Best Invest, also founded in 2021. Neither of them had employees or income last year, that is, they recorded a loss, according to FIA data. However, they appear as the owner of the plot, and it should be noted that even for this plot, the Municipality of Trnovo was unable to obtain a change of use from forest to construction land.

As part of this centre, the plot owners are also Unigradnja, Gradur TGI, Ideja, and Brand, but according to the information available to Žurnal, they too do not have permission from the Ministry of Economy of KS to change the use of forest land to construction land.

Doctors, professors, lawyers, football players, owners of private companies, people employed in international organizations, as well as accused in the court cases Zadruga, Pravda i Bosnia (Cooperative, Justice and Bosnia), as well as persons, according to our sources, who could soon be found on "sky lists".

Neighbours in the same building are the director of KCUS Sebija Izetbegović and Senka Mesihović-Dinarević, and not far from them there are apartments which are also owned by Alija Budnjo, Amela Čampara, wife of Aljoš Čampara, Jusuf Zahiragić, husband of judge Adisa Zahiragić, former dean of the Faculty of Veterinary Medicine Nihad Fejzić, from Sarajevo restaurateur Malčo Rovčanin, Emir Talirević, and Amar Arslanagić, one of the directors of Bosnalijek who is accused in the case of the same name.

The magazine previously wrote about the Arslanagić family.

Bosnalijek in the tourist resort Babin do has its own apartments. In the same building is the owner of an apartment and the company Rhea Expres, which was mentioned at one of the hearings in the "Bosnalijek" case, which is being held in the Cantonal Court in Sarajevo. Namely, the prosecution presented Bosnalijek's invitation to submit an offer for transport and forwarding services, and at the same time dozens of invoices from Rhea Expres, which, according to the prosecution, show the manner in which funds were withdrawn from Bosnalijek.

According to the expert, Reha Expres was selected without a procedure, and through whose mediation the forwarding services became significantly more expensive. According to the cadastre, one of the shareholders of Bosnalijek, Nijaz Skenderagić, appears as the owner of the plot with a share of 2.4 per cent, within the business and sports centre Trnovo.

Among apartment owners are Asim Sarajlić, who is currently on trial in the Municipal Court in Sarajevo, as well as Mirsad Delimustafić, Alija Delimustafić's brother, both accused in Pravda, and certain persons whose names are mentioned in the Zadruga court case, namely the owner of Eurohaus Zijad Blekić and the director of the company "Prevent Safety Goražde" Sead Hubjer, and Samir Šehović from the company "Wood team".