INDICTMENT AGAINST THE MINISTER OF SECURITY: Selmo Cikotić in the chain of international arms smugglers?

After more than 10 years of investigation, the Prosecutor's Office of BiH is filing an indictment against the Minister of Security, Selmo Cikotić, on suspicion of illegal activities that he performed as the Minister of Defense of BiH. The damage to the budget is estimated at 9.7 million KM.

The story begins in mid-March 2010, when the Presidency of BiH, at an emergency session, adopted the Decision on the suspension of issuing licenses for the export of weapons and military equipment from our country. The ban on exports was due to suspicions that the export of weapons from our country was carried out contrary to UN resolutions and other international regulations. The warnings came from the Intelligence and Security Agency and international diplomatic circles.

Simply put, the Croatian company “Scout”, owned by Ivan Peranec, had contracts with the former entity ministries of defence to buy excess weapons. As the BiH Ministry of Defense, as the legal successor to these agreements, allegedly did not have the types and quantities of contract weapons at its disposal, it should have been replaced by another. Here we come to the story of possible corruption...

"It is problematic what was delivered, what was not. The specification of 2010 and 2011 is known, but it is problematic what was delivered in 2004 and 2005. Bookkept. And it is known, because different documents were signed. The fact that you know something, "It doesn't mean it's true. You have documents that have been signed. With those documents, obligations are taken over from the Ministry of Defense to 'Scout', and when you scratch and ask on the basis of which this information was obtained, then there is a problem. Falsifying data", Berko Zečević said for RSE, as an expert witness in this investigation.

Slobodan Tešić, an arms dealer from the US blacklist, about whom Žurnal wrote, is trying to use all methods, which do not exclude corrupt ones, to secure the consent of the Ministry of Defense that "Scout" gets launchers and associated missiles as a replacement. Tešić has already found a buyer in Azerbaijan, so he would make a lot of money on that resale. The current director of the Directorate for Arms and Military Equipment of the Republic of Srpska, Dragan Kapetina, who ran Tešić's companies at the time, helped him in everything through mediation. According to the prosecution, the then Minister of Defense of BiH, Selmo Cikotić, "fell" there. 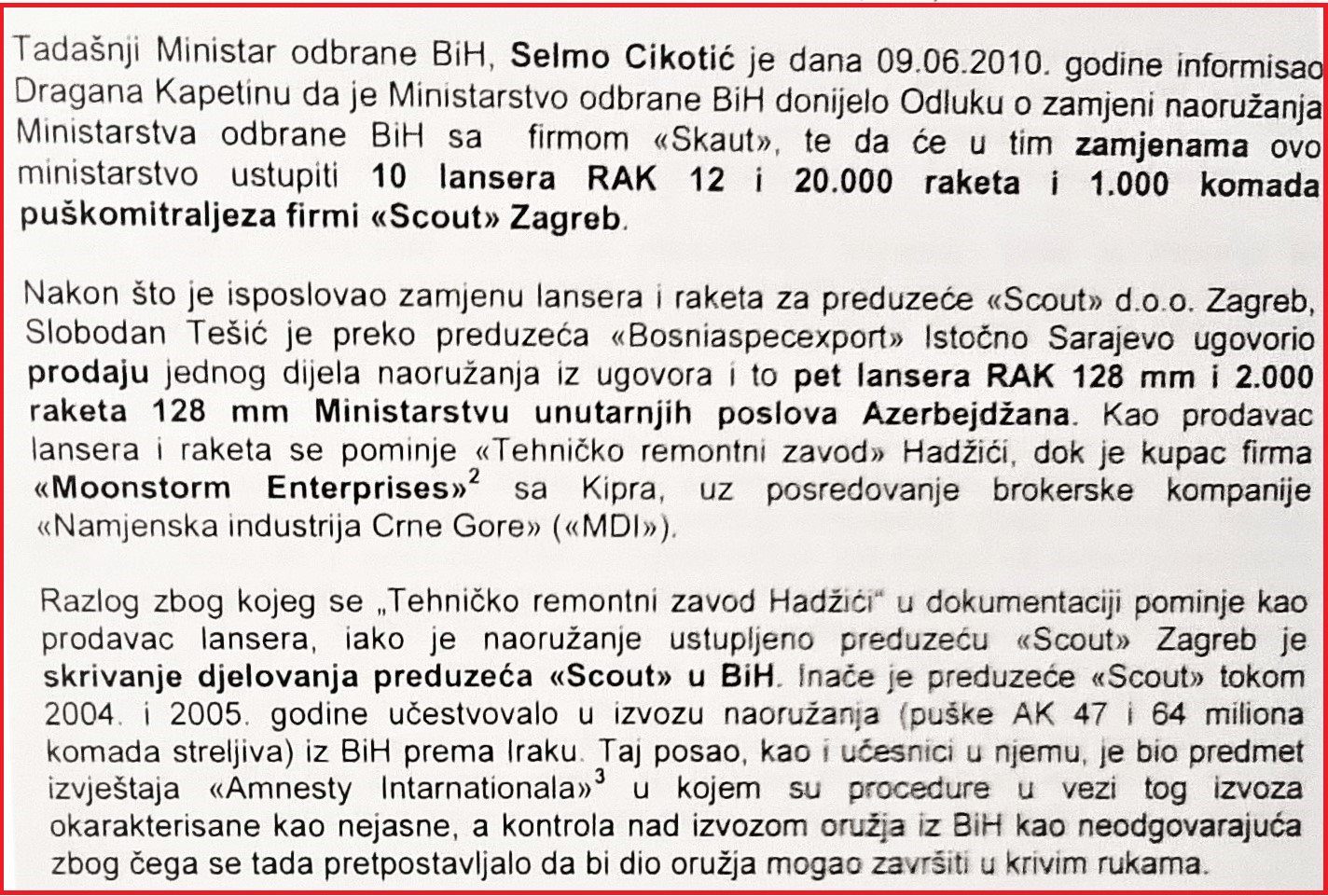 Tešić's company "Bosnia spec export" then, in addition to the deal with Azerbaijan, agreed to a similar one with Yemen. Concerns over these exports have been expressed by both the UN and the OSCE. After the first part of the shipment to Azerbaijan was transported by flights through Mostar airport, Tešić initiated "activities" towards persons from BiH institutions, primarily the Ministry of Defense, to ensure the export of the remaining quantities of launchers and rockets.

After the second tranche of the exchange, the Ministry of Defense stopped the delivery of weapons for "Scout". The company then sued the ministry, demanding the delivery of the remaining goods, according to them, worth 20 million KM. In 2018, the Court of Bosnia and Herzegovina ruled in favour of “Scout”, but the weapons were not delivered. In previous years, security agencies recorded the activities and meetings of “Scout” representatives with employees of the Ministry of Defense even after the end of Selmo Cikotić's term.

The story of the sale of weapons from BiH is multi-layered and includes many names. For now, the prosecution has singled out Selmo Cikotić, determining that the damage to the budget in the amount of more than 9 million KM was done, as well as multimillion personal benefits for several people, but it is certain that he is only one from the list. Some of the suspects have since passed away, but if there is consistency, the list of defendants could be expanded.

After Sadik Ahmetović, Fahrudin Radončić and Dragan Mektić, Selmo Cikotić is the fourth in a series of BiH security ministers against whom the state prosecutor's office has filed an indictment. Radončić was released, Ahmetović was sentenced in the second instance to six months in prison, while the trial of Mektić is still ongoing.

CHILD ABUSE: A school example of the unification of Serbia and Republika Srpska